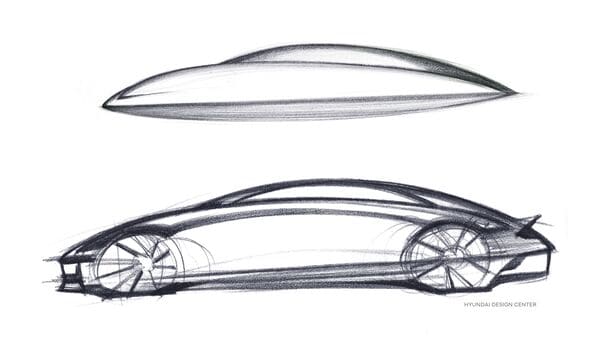 According to reports, it is being said that Hyundai Chairman Chung Eui-sun directed a few tweaks to the electric car before it was brought to the market. The changes mainly included modifications to the front and rear bumper of the EV to give it a more aerodynamically-optimised shape and also offer users extra range at a single charge.

After releasing the concept drawing of the Hyundai Ioniq 6, the latest teaser showed the look of the tail light of the electric sedan. The short video showcased connected LED taillights at the rear which have patterns on them. Hyundai stated, “With aesthetical and aerodynamical design, Ioniq 6 is where your life changes. Ioniq 6, with a silhouette we’ve only dreamed of, is shaped with glass-like, transparent textures that reflect light exquisitely. It will connect you to another dimension, and evoke a new era."

With a sharp silhouette that promises optimal aerodynamic traits, the Hyundai Ioniq 6 will be based on the Electric Global Modular Platform (E-GMP), the same as the Ioniq 5 which is Hyundai's first electric vehicle. It is being expected that the Hyundai Ioniq 6 electric sedan may come with a 77.4 kWh lithium-ion battery pack and may get both a single motor and dual-motor setup.