Dodge Charger Daytona SRT Concept has a multi-speed transmission which is quite unique for an electric vehicle.
By : HT Auto Desk
| Updated on: 19 Aug 2022, 09:23 AM

Dodge has showcased the future of electrified muscle cars at the Dodge Speed Week event series. The new concept is called Dodge Charger Daytona SRT. There was a lot of hype around the brand because they are known for making muscle cars with big engines that were usually fuel-hungry, and everyone wanted to know their future with electric cars. The Dodge Charger Daytona SRT Concept looks exactly like the future of electric muscle cars.

The Charger Daytona SRT Concept comes with interesting features such as a ‘Fratzonic Chambered Exhaust’ which is an industry-first exhaust system for an electric vehicle that is supposed to deliver a performance sound as the SRT Hellcat produces. Till now, electric vehicles have used speakers to mimic sounds. The new exhaust system on the concept can deliver an exhaust note of 126 dB which is equal to the SRT Hellcat so it can be expected that the vehicle will sound good. 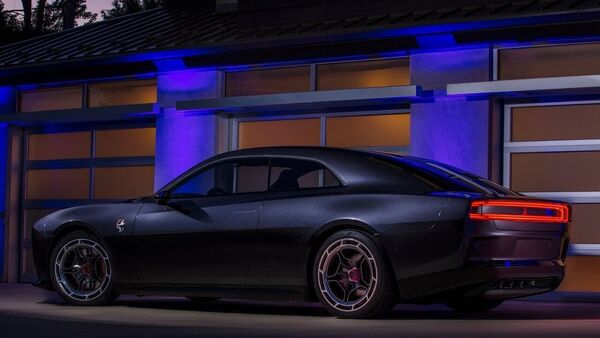 Dodge claims that the Banshee powertrain will make the vehicle faster than a Hellcat.

The design of the concept is taken from the iconic 1968 Dodge Charger. The Charger Daytona SRT Concept does look like a proper muscle car but has a modern look to it. The Fratzog logo of Dodge also makes a comeback and will be used on electrified vehicles from Dodge. The manufacturer is using an 800V Banshee propulsion system. The new powertrain will also be used on Dodge's first electric vehicle. Dodge has also said that the new electric vehicle will be faster than the Hellcat in all key performance measures. There will also be an all-wheel drive system that will be offered as standard.