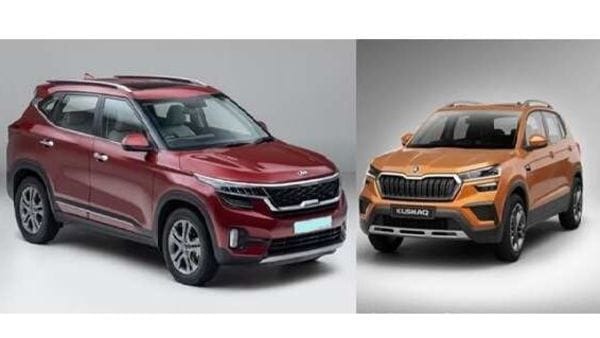 When launched, the Skoda Kushaq will be placed in the price range of ₹12 lakh and ₹15 lakh.

Skoda globally revealed the all-new Kushaq SUV in India recently. The Kushaq is going to be placed as a direct rival to the likes of Kia Seltos and Hyundai Creta. The Kushaq is underpinned by the MQB-A0-IN platform and is the first product to be introduced under the group's India 2.0 project. Here is how it compares against the Kia Seltos on paper:

Both the cars are decently equipped in terms of overall features. Kia Seltos is the segment's only car to get a heads-up display, in addition, it also gets a 360-degree parking camera, 8-way powered driver seat, a 7-inch digital MID screen, and even a Bose sound system. Features such as ventilated seats, connected car tech, cruise control, wireless charging, steering mounted controls, etc are standard on both SUVs. The Kushaq gets an optional 7-inch and 10-inch infotainment system and both the units can be paired to Android Auto and Apple CarPlay system. It also comes with an in-house developed six-speaker stereo system which is offered as part of the standard kit.