Oben Rorr offers a very interesting proposition as an entry-level electric bike. But is it what you need?
By : Prashant Singh
| Updated on: 01 Jul 2022, 11:00 AM 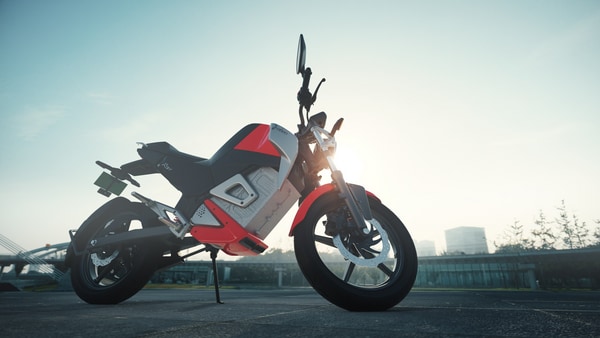 Oben Electric, a fairly young electric bike company with roots in Bengaluru announced the launch of its first-ever product - Rorr EV - earlier in 2022. While I missed the opportunity to get the first look at the battery-powered vehicle when its price was announced, the company was kind enough to send me an invite to be among the first ones to get a first-hand experience of the motorcycle.

I'll be honest, Oben did manage to make an impression with the price rollout announcement, especially when you consider the fact that it costs as low as 1 lakh (ex-showroom) in Maharashtra, while the higher range of pricing goes up close to ₹1.25 lakh in Tamil Nadu and several other regions. Needless to say, this range brings quite a significant difference for the same motorcycle, depending on the place a customer resides. Anyways, Rorr has been placed in a segment that is yet to offer competition and the company has quoted that it wants to use this opportunity to excel ahead given the headstart it managed to make - being the only handful of electric vehicle companies in India to have a proper electric bike offering. So what is the Oben Rorr EV all about? Read on to know. 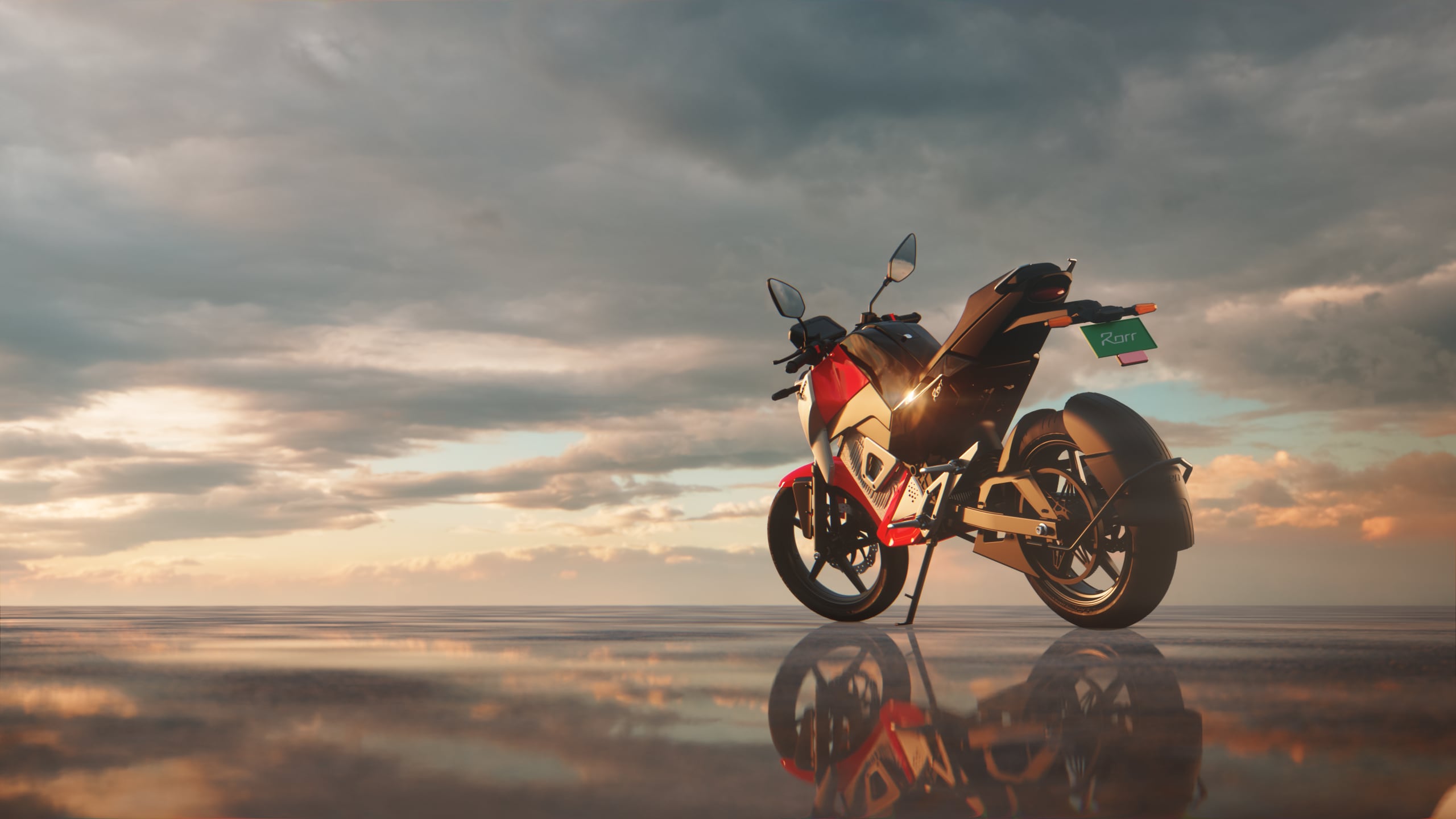 Oben Rorr makes use of the right body lines and also feels of decent size, even for somebody of my huge dimensions. While some products in the segment appear more like toy bikes, made for gearless license holders, the Oben Rorr actually has a smartly carried out design. It uses sharp-looking panels and stands tall from the ground, contributing to its aggressive look.

At the front sits a neat-looking round headlamp which gets LED daytime running lamp and is flanked by indicators which are again LED. However, when glanced from the rider's view, the blinkers appear to be stretching forward instead of being aligned on a straight line.

The tank becomes a centre point for different, angular body panels that come in more than one shade. And the use of dual-tone colour scheme also gives the bike an appealing look. On the top of the bike's tank sits a space for its charger which can be unlocked using the same key as the bike's main key. This space houses the on-board charger so the rider doesn't have to bother carrying the charger externally in a bag pack. Quite thoughtful.

On the lower side of the bike where ICE-powered bikes usually house the engine, cylinder chambers, sits a 4.4kWH fixed battery. This has been given a fin-like appearance with lines drawn throughout the body. Further down sits a body-coloured belly pan that protects the lower components from any kind of damage, however, the bike sits fairly high from the ground at 200mm which keeps it safe from everything Indian roads might throw at it. Come to the rear and the cup-sized LED tail light syncs in with the overall design of the bike and there is also a blacked-out tail assembly that protrudes out of the back, designed for housing the number plate and rear indicators.

Overall, the Oben Rorr does look smart and designed well, however, the pressing matter here is the quality of materials used and also the fit and finish which is concerning. The panels come loosely fitted, including the single-seat, and also the switchgear quality isn't really impressive for a bike costing ₹1- 1.25 lakh. There are loose wires around the handlebar that need immediate attention and should be dealt with immediately.

The bike also gets a fully digital screen that shows all sorts of information such as current speed, charge, range etc. It can also be connected to a smartphone, an application for which is still under development and will be rolled out to the customers at a later stage. The display is LCD and not TFT as found on some other EVs. The screen lacks sharpness and also the brightness needs to be adjusted to higher levels as information isn't quite visible in daylight. 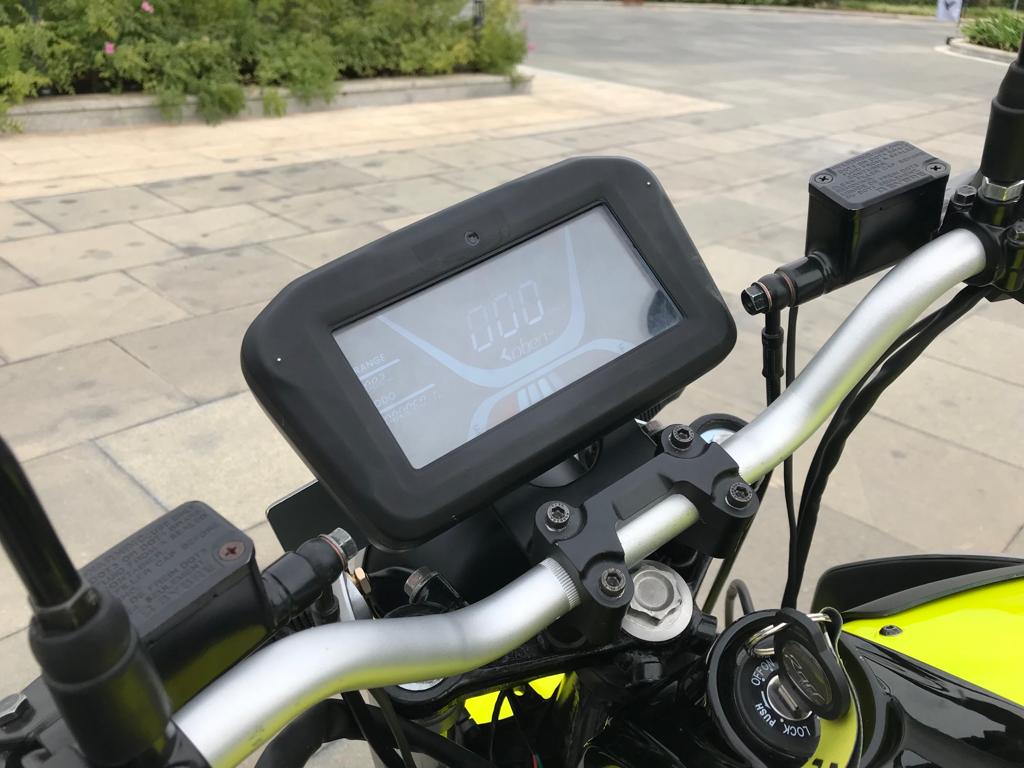 The screen on Oben Rorr lacks sharpness and also the brightness needs to be adjusted to higher levels as information isn't quite visible in daylight.

Turn on the key, hold the starter and the bike turns on instantly. While there is no sound, as there is no exhaust, the bike notifies that the motor is on with an indication on the screen. Also, there is a blinking safety light on the top of the screen along with a beep safety sound which goes away as soon as the bike starts moving.

Twist the throttle and the bike starts to roll on smoothly, without any lag at all. Also good to see that the re-gen is managed very well when you roll off the throttle, so there is no sudden jerk, you will hardly see it working. Moreover, there are three riding modes to choose from - Eco, City and Havoc. As the name suggests, Eco is the slowest mode with maximum promised range, while Havoc is the fastest. City, on the other hand, sits right in between. Havoc is certainly the most exciting to ride in and has a top speed of about 90-100 kmph depending upon the rider's weight and road conditions. The top speed, as well as range, also differs in all the modes. While the company claims a full-charge range of 200 km, expect the real-life range while driving in changing modes to be around 100-120 km and I am stating this based on the limited run I did within a few hours, but that remains open for a more thorough road test.

Acceleration in the Havoc mode is impressive and the bike reaches 80-90 kmph in no time. However, in the Eco, and City modes, the acceleration is notably milder. 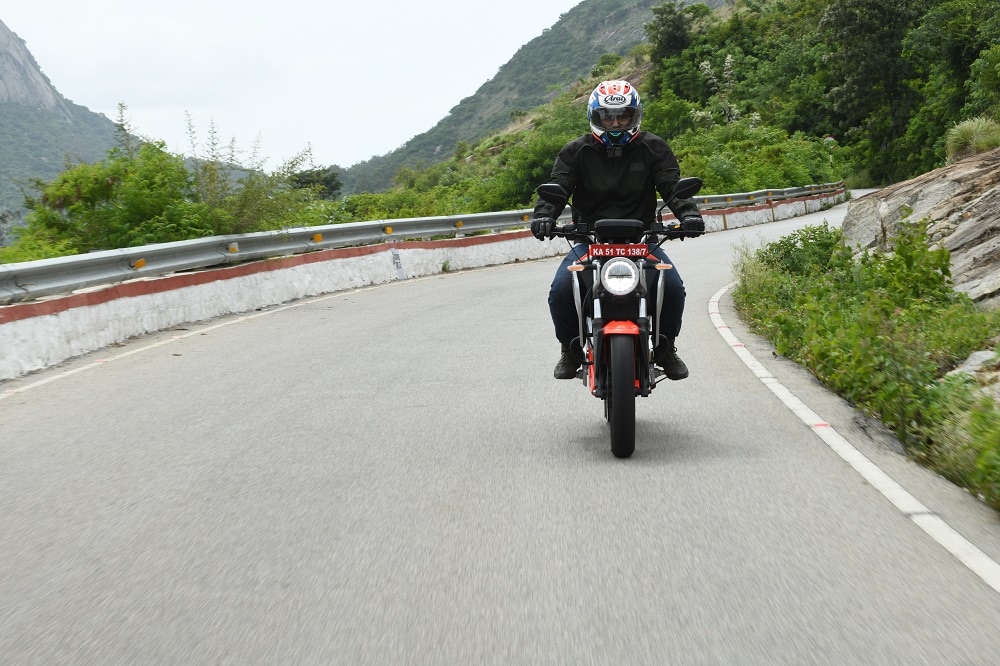 Twist the throttle and the Oben Rorr ebike starts to roll on smoothly, without any lag at all. And there are also three riding modes to choose from - Eco, City and Havoc.

Use of LPF batteries:

Oben has been stressing on the use of LPF batteries for its Rorr EV. As per the company, these batteries can withstand 30% higher temperatures and are safer to be used in the Indian climate which is hotter most time of the year. Moreover, one of the co-founders was also quoted putting forward the information that the company has left no stones unturned to make its EVs safer. LFP is known for more stable chemistry, which means the temperature threshold for thermal runaway (or fire) is higher than that of NCM.

These bikes ‘will not blast’ is what Dinkar Agrawal, Co-founder and COO of Oben told HT Auto, quite confidently. Dinkar said these batteries are not just safer in terms of usage, but also require relatively safer materials for the making. For the record, NMC uses Lithium, Manganese, and Cobalt oxide as cathode material while LFP uses Lithium Iron Phosphate chemistry.

The company communicated that the bike I tested was the final production version model to be delivered to the customers. And that I think it is a bit of a concern due to certain throttle and power-related issues faced during the ride. The motor lost power for some several seconds mid-way around a corner and that wasn't surly a pleasing experience. Also, the throttle modulation needs more work as the motor keeps the power on for half a second even when the throttle is pulled back. These issues surely need immediate attention and should be resolved before the customers take deliveries of the bike sometime around later this year.

Oben has been stressing on the use of LPF batteries for its Rorr EV. As per the company, these batteries can withstand 30% higher temperatures and are safer to be used in the Indian climate.

Scrolling through the bike's dimensions list and one would instantly notice the wheelbase length of the bike which spans over 1400 mm, 1423 mm precisely. Needless to say, it is long which makes it stable on straight rides, however, throw it around a corner and it acts like a child that's hard to deal with. Also, taking a U-turn is tricky, and needs time for understanding the dynamics of a bike with a long wheelbase and incredibly aggressive rake angle. Perhaps this is why the bike feels heavy on turns even though it is just 130 kg. In short, handling isn't the strongest suit of the bike, and that's for sure. Maybe a shorter wheelbase, along with a slightly relaxed rake would balance out its cornering manners, but who knows.

However, if you look at the Rorr as an everyday city bike it is sorted. It rides well and is stable on flat roads, and also sticks to the ground as a regular commuter should. You should be able to ride it to your school, college, or grocery store without any issue as long as you keep it charged (claimed charging time is ~2 hours). But don't bother going apex hunting on this, it is far from that sport, at least in the current configuration. 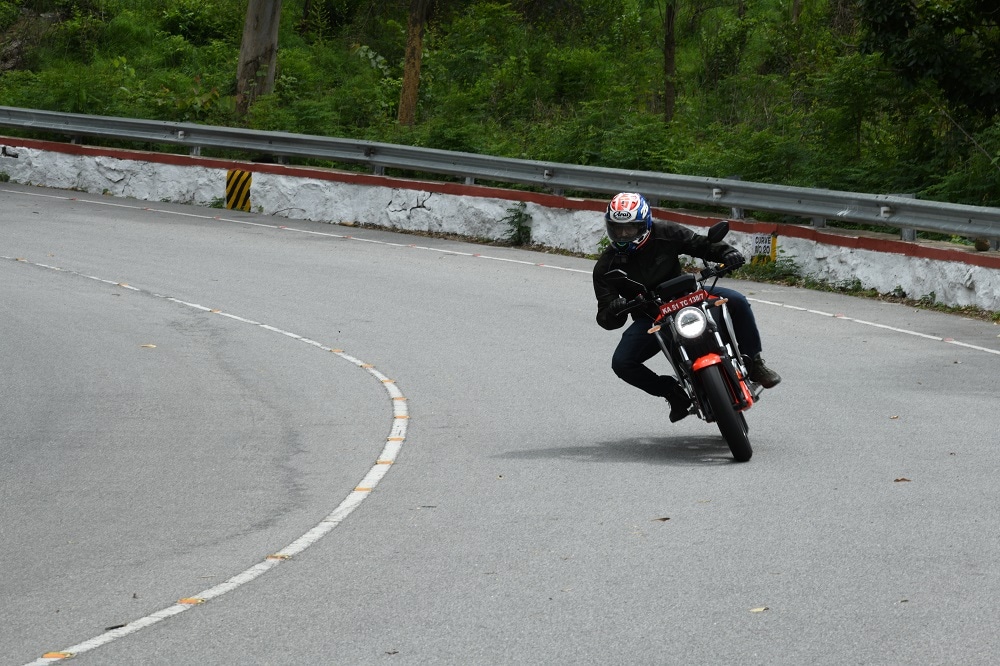 Throw the Oben Rorr EV around a corner and it acts like a child that's hard to deal with. However, spend some time with it, adapt to its dynamics, and you'll find a way to corner it eventually.

The suspension kit includes a 37mm dia telescopic front fork backed up with a mid-mounted mono-shock at the back. I wouldn't say that the suspension makes the ride comfortable, as it doesn't. It is overly stiff for its own good. The result is a harsh ride that shakes you up to the bones on uneven roads. So perhaps a slightly softer setup, Oben. Are you listening?

Oben Rorr is a smart-looking, no-non-sense electric bike that doesn't charge a bomb, especially in select Indian cities. The claimed full range, LPF battery pack and smart exteriors are why one should consider this bike, however, there is a whole list of other bits that will come out to be a concern for buyers. Oben Rorr is far from being called a perfect EV, and needs improvements, especially in terms of fit, finish and throttle control/modulation, however, if you like battery-powered bikes, Rorr is one of the very few choices available in India right now.