Wind speeds crossed 100kmph in Kolkata, leaving a trail of destruction in its wake. Cargo trucks swayed and toppled, cars were submerged and scooters floated like bath tub toys.
By : Shubhodeep Chakravarty
| Updated on: 21 May 2020, 11:35 AM 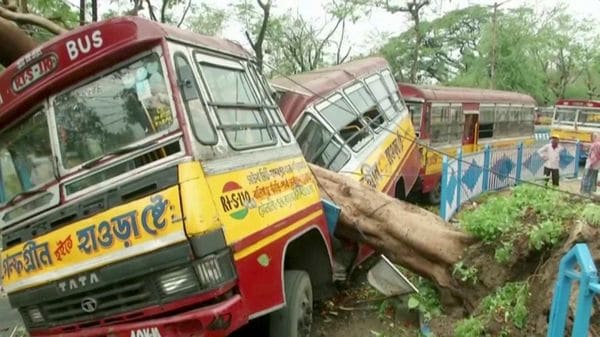 A bus damaged by a fallen tree due to Cyclone Amphan, is seen in Kolkata on Thursday (May 21).

Wind speeds at over 100 kmph accompanied by massive and consistent rainfall for most of Wednesday has left Kolkata and many parts of West Bengal resembling water bodies with cars floating around where there was once a road. West Bengal Chief Minister Mamata Banerjee has called the natural calamity a bigger threat than Covid-19 disease and photos emerging from the state point towards what she perhaps meant.

(For all updates on Cyclone Amphan, log on to HT Bangla)

Kolkata, the capital city of the state, suffered enormously since Wednesday late afternoon when Cyclone Amphan made landfall. Lower reaches of the city reported at least knee-length water while many post areas here also had roads completely submerged under water. Photos of cars floating around in rainwater quickly went viral on social media. In some of the videos shared, vehicles are seen floating and nudging against each other much like fishing boats when parked. "It rained so heavily that water started accumulating in the stilt parking of our residential society. Every single scooter and bike parked here was completely under water and the cars had water till the windshield. I doubt any of these vehicles would be operational,"said Surajit Bose, a local who stays in Kolkata's Lake Garden area.

Am distressed at the loss of lives and property #Amphan. Was in constant touch with agencies for last few days. Their commitment has minimised damage.

It has left behind a trail of destruction. Worst since decades. All need to come forward for massive relief work. pic.twitter.com/X0Ep0D5geD

Some of the cars may have escaped water's fury but were damaged because they were parked under trees that collapsed. While authorities have not yet revealed how many trees collapsed, some reports suggest as many as eight vehicles have been damaged - some completely wrecked - due to trees falling on them. "I can see from my balcony that a tree has fallen on a car in my locality. From up here, I think the damage is quite severe," said Durba Mukherjee who stays on the fifth floor of a residential society near Eastern Bypass Road. She added that it was a nightmarish Wednesday evening and night due to the winds howling and battering against windows of her building which has eight floors. A police car is seen in Kolkata issuing warnings before high-speed winds and heavy rainfall unleashed its fury on the city. (PTI)

Amphan, the most severe storm in the Bay of Bengal since the Odisha super cyclone of 1999, made landfall between 3.30 pm and 5.30 pm.

At the time of filing this report, West Bengal had reported three deaths and while saving lives is of vital and crucial importance, the damage to property could well prove to be enormous.