The kid could barely reach the pedals of the Kia Sportage and a dashcam video shows him attempting to drive it to a nearby Speedway.
By : HT Auto Desk
| Updated on: 23 May 2022, 10:19 AM 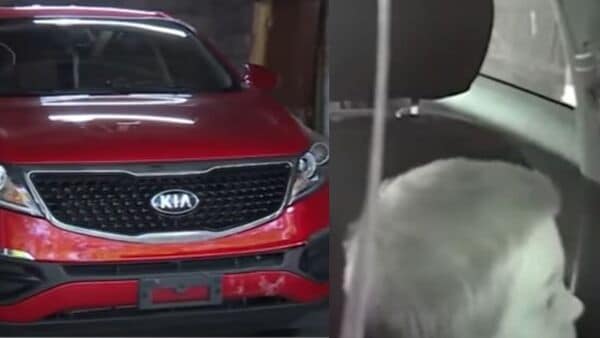 Screengrab of a video posted on YouTube shows a seven-year-old driving his parents' Kia Sportage SUV.

Kids are intrinsically curious and want to explore all that is within their reach, and a seven-year-old took his exploration to another level by taking his parents' Kia Sportage SUV out for a joyride. Daniel Wittenbach used a chair to grab the keys to his parents’ Kia SUV while they were sleeping. He then got into the car and even remembered to put on his seat belt before accelerating the vehicle.

Wittenbach's exploration in the sportage was caught on a dashcam, and the video shows him get behind the wheel and attempt to drive to a nearby Speedway. The kid could barely reach the pedals and had no idea what he was doing as he thought the crossover was “driving by itself," local TV station WLWT reported.

After leaving his neighborhood, Wittenbach headed down Roosevelt Boulevard, crossed the median, and drove into oncoming traffic. When other drivers saw the kid behind the wheel, they could barely believe their eyes and some people quickly dialled 911, informing police about the kid driving the Kia SUV.

Some bystanders even jumped into action to save the kid from getting into any trouble, with some reportedly trying to break the windows to gain access to the vehicle in order to bring it to a stop. However, their efforts were in vain as the seven-year-old's adventure wouldn’t end until after crashing into a Jeep Liberty.

Fortunately, the kid wasn't hurt but authorities were less than amused and Butler County Children’s Services is said to be investigating the incident. The kid’s father, Brian Wittenbach, told the TV station, “My wife and I are not bad parents, and I’m sure people are going to label us like that." He added this could happen to anyone and it’s hard not to sympathize with them.