Watch: Mahindra Bolero gets swept away in canal under heavy rainfall

Three occupants had a narrow escape but the Mahindra Bolero could not survive the full fury of an overflowing canal in Madhya Pradesh.
By : HT Auto Desk
| Updated on: 19 Jul 2022, 12:13 PM 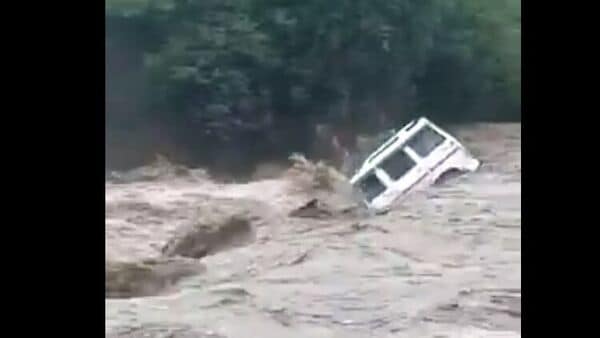 Screenshot from a video which showed a Mahindra Bolero being swept away by overflowing water in MP's Ujjain.

Mahindra Bolero may be one of the toughest vehicles on Indian roads but even this mighty SUV has its limitations against the full fury and force of nature. Three young men found this the hard way when they had a narrow escape when trying to cross an overflowing canal under heavy downpour. But while the three occupants managed to make their way to safety, the poor Bolero did not have the same luck.

According to media reports, the incident occurred in Madhya Pradesh's Ujjain, in a village called Narayana Baloda Khal. It is reported that the driver of the Bolero attempted to cross the overflowing canal but soon realized that it was a futile exercise. Even though the Bolero is known for its rugged character, the sheer force of the water gushing across meant that passing through was not possible.

Such was the force of the water that even reversing was not an option. It is being reported that once this was realized, attempts were made to rescue the vehicle using ropes but this too proved to be unsuccessful. So, while the driver and occupants managed to get out of the Bolero, the SUV itself was swept with a high degree of force.

The incident once again underlines the need to be extra cautious when driving in rainy conditions and especially when encountering overflowing water across roads. While some SUVs and many 4x4 options can indeed manage some very challenging conditions and terrain, it is better to not test the absolute limits of a vehicle by pitching it up against the full force of nature.