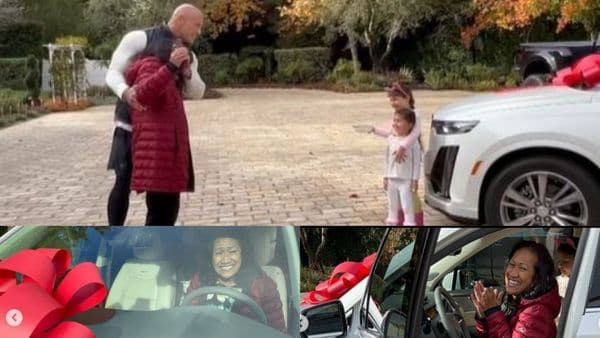 Hollywood actor Dwayne Johnson, popularly known as ‘The Rock’ has gifted his mother a new ride for Christmas. The actor posted an endearing video of his mother, Ata Johnson, getting surprised at the sight of the new Cadillac XT6 on his Instagram and pictures of her enjoying inside the new car.

In the Instagram video posted by The Rock, one can see the actor closing his mother's eyes while her grandkids stand in front of the cadillac to surprise her. He then removes his hands from her eyes and watches her get all emotional at the sight of her charming new gift.

In the post, the actor mentions that initially there was some "ugly crying" which was followed by lost of joy. Then Ata and her grandkids climbed inside the Cadillac for somme pictures and fun. The Rock has also posted a couple of pictures along with the video where his mother can be seen laughing while sitting in the driver's seat. "I'm so grateful I can do this kinda stuff for my mom, who's had one helluva life. I don’t take any of it for granted. Neither does she," he wrote.

Though it is not clear which trim level of the Cadillac XT6 was bought by the actor, its sticker price ranges from around whopping $50,000 to $70,000. It is a very kind and endearing gesture made by the actor for his mother as the smiles seen on both their faces tell.

The Cadillac XT6 sources power from a 2-litre turbo or a 3.6-litre V6 engine that is mated to a nine-speed automatic transmission. The vehicle comes equipped with Brembo Performance front brakes along with front and rear red-calipers which provide precise and consistent braking along with visual appeal.