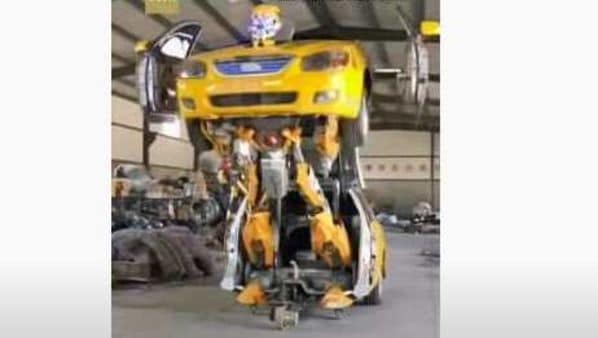 An old car transforming into a robot toy. (Photo courtesy: Screengrab of a video posted by CGTN)

Every 80s and 90s kid has once in his/her lifetime been fascinated by the toys and science-fiction series of 'The Transformers'. These futuristic living autonomous robots have always been associated with vehicles as they transformed into cars during battles.

After all these years, the craze for Transformers hasn't really toned down. Imagine actually seeing these robo-toys coming outside comic books and television screens. Well, that is quite possible. A young Chinese man based in Baoding, north China's Hebei Province, has made this dream come true.

A video of the man and his team working on these Transformer models made out of old cars has been shared on the internet. In the video, the team can be seen connecting body parts of these robo-toys using various engineering tools.

A bright yellow car can be seen transforming into a walking robot. The head of the Transformer character pops out as the hood of the car opens. Then the doors of the car stretch open too and the car starts standing on its two feet. Blink your eyes and you see a Transformer model standing right in front.

The Chinese man has been entwining and welding real Transformer models out of old cars for quite some time. The largest model made by his team measures more than 12 meters tall. Though it might seem otherwise but turning one car into a Transformer takes the team about one whole year or even more. "It doesn't seem complicated to make one but ensuring the continuity of the model's movement and its overall command is a bit difficult," model maker of the team, Quan Likun, says in the video posted by CGTN.

Along with old car parts, body panels based on the Transformer models seen in TV animated series and films are used as raw materials to create these models. They are spliced and welded for months and months to finally make the perfect replicas of the Transformers shown in movies.