Volkswagen to present the new Tiguan, CC vehicles in Frankfurt

The car manufacturer Volkswagen will premiere the latest generation of the Tiguan car as well as a new updated version of its CC coupé at the Frankfurt Motor Show.
By : AFP
| Updated on: 28 Aug 2015, 05:08 PM 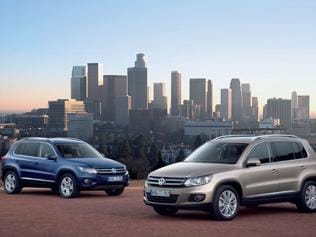 The last redesign of Volkswagen’s first generation Tiguan vehicle dates back to 2011. Photo:AFP

The car manufacturer Volkswagen will premiere the latest generation of the Tiguan car as well as a new updated version of its CC coupé at the Frankfurt Motor Show. Although both models have remained a mystery to the public, it has been suggested that they are largely inspired by the T-Roc concept car and the GTE C coupé.

The Motor Show in Frankfurt is just a couple of weeks away, yet Volkswagen has remained mum on any details regarding its 2016 Tiguan model. In fact, the German manufacturer has still not communicated any information on this model. Nevertheless, the vehicle appears set to be made available in a 5-seat and 7-seat version, though the latter will most likely be reserved for specific markets.

The Tiguan could be modeled after the 4-wheel T-Roc concept car presented in 2014 with an ultra-modern design, LED headlights and detachable roof elements. The SUV will be equipped with a gas or diesel engine and an all-wheel drive option. As the manufacturer has done with the Volkswagen Golf, the Tiguan could be made available in a sporty version in the future -- the Tiguan R -- with a 200hp engine

As the Motor Show takes place in Volkswagen's home country, the car manufacturer will also introduce the latest version of its CC coupé, inspired from the last Passat generation. But again, the brand has thus far remained silent regarding any details, though we know the model is inspired by the C coupé concept GTE unveiled this spring at the Shanghai Motor Show. Equipped with the Hybrid Plug-in system and featuring a total of 245hp for an average fuel consumption of 2.3l/62 miles, the vehicle will feature a new design as well as futuristic ambient-lighting, a first for the brand.