The first SUV produced by Skoda was the Yeti back in 2009.In 2017, the carmaker launched its SUV campaign and gradually introduced the Kodiaq, Karoq and Kamiq models.The Enyaq iV, Skoda's first all-electric model on the MEB platform, made its debut in September 2019.
By : HT Auto Desk
| Updated on: 02 Mar 2021, 01:34 PM The two millionth SUV rolled off the production line at Skoda's main plant in Mlada Boleslav.

Michael Oeljeklaus, Skoda Auto Board Member for Production and Logistics, said, "The mark of two million SUVs produced, ‘made by Skoda’, is a powerful testament to our team’s great personal commitment and expertise. The milestone vehicle is also the 250,000th Skoda Kamiq – which makes this production achievement a very special occasion for us."

Skoda began manufacturing sport utility vehicles with the world premiere of the Yeti compact SUV in 2009. It laid the foundation for its future SUVs. By 2017, Skoda produced 685,500 units of Yeti, the most by the carmaker.

In 2017, Skoda had started its SUV push by driving in two more models - Kodiaq and Karoq. So far, the carmaker has produced approximately 593,600 units of the Kodiaq and 454,800 Karoq SUVs. Two years ago, the Czech carmaker debuted the Kamiq SUV to its model line-up, completing the lower end of its SUV range. A break-up of how many SUVs Skoda has produced over the years.

Much later, the carmaker forayed into the electric vehicle segment with the launch of its first the all-electric Enyaq iV SUV. Launched in 2020, it is Skoda’s first model to be based on Volkswagen Group’s modular MEB electric car platform. The Enyaq SUV is the only MEB-based vehicle in Europe to be built outside Germany. The car is available with rear- or all-wheel drive, three battery sizes and five power variants ranging between 148 and 306 PS, providing a range of more than 500 kms. So far, Skoda has produced around 1,100 units of the Enyaq iV.

In the Czech Republic, Skoda produces its SUV models at two sites. The Kamiq, Enyaq iV and the Karoq are built at the company’s headquarters in Mlada Boleslav. The Karoq also rolls off the production line in Kvasiny, as does the Kodiaq. Outside of Skoda's homeland, the carmaker manufactures its SUV models in China, Russia, and India, as well as in Ukraine and Slovakia. In China, the brand’s largest single market worldwide, Skoda offers market-specific derivatives as well – the Kamiq GT and the Kodiaq GT – making China the only market in which the current Skoda model portfolio includes five SUVs in total. 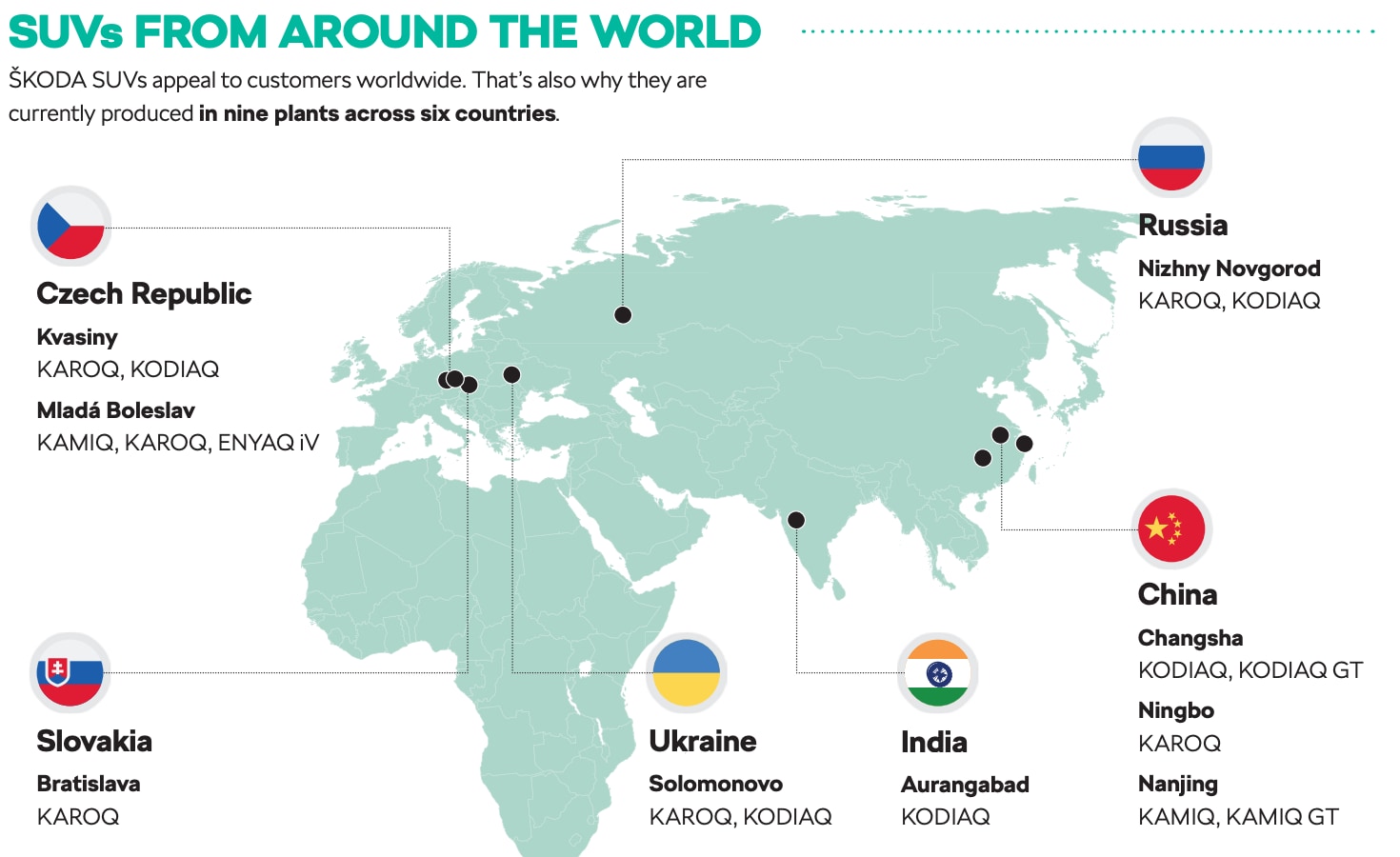 A list of countries where Skoda produces its SUVs.

This month will see the world premiere of the Skoda Kushaq in India. It is the carmaker’s first production model based on the MQB-A0-IN platform – an MQB variant specially adapted by Skoda for the local market. The Skoda Kushaq is the first of several compact models as part of the India 2.0 project and marks the start of a new era for the company in India. The official launch of the new Skj Kushaq is set for 18 March 2021.