Toyota and Ford inform pause in some output as the protest by truckers in Canada against vaccine mandates has started impacting auto makers.
By : HT Auto Desk
| Updated on: 10 Feb 2022, 08:08 AM 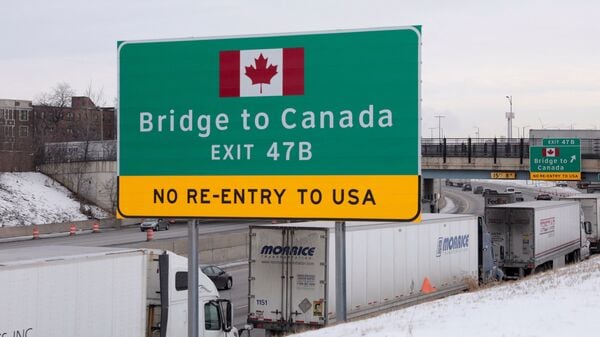 Commercial Trucks idle on the side of the expressway after the Ambassador Bridge to Canada shut down in Detroit, Michigan.

The massive truckers' protest against vaccine mandate in Canada has started having economic ramifications even as the political turmoil continues unabated and Prime Minister Justin Trudeau continues to urge for the demonstrations to end. Ford and Toyota have now confirmed that some of the output has to be halted owing to the prevailing situation.

According to a Reuters report, Toyota is pausing car production at its Ontario facility while output is also being put on hold at a Ford engine plant. Ford's plant in Oakville factory near Toronto is also working on reduced shifts. And these two major automotive brands may not be the only ones to hit the halt button.

Protesting truckers have shut down Ambassador Bridge for traffic coming in to Canada. Ambassador Bridge is a key crossing point for car makers in Detroit and a ‘no passage’ here could hit supply lines severely, for vehicles and other products as well.

Brian Kingston, CEO of the Canadian Vehicle Manufacturers’ Association (CVMA), has already elaborated on the potential impact on the automotive industry from the prevailing situation. "Blockades at Canada’s borders are threatening fragile supply chains already under pressure due to pandemic related shortages and backlogs," he said, according to reports. "We are calling on cooperation from all levels of government to resolve this situation and bring an immediate end to these blockades."

For an automotive industry that has already been struggling in pandemic times and continues to face an unprecedented shortage in semiconductor chip, the latest disruption has come as yet another significant challenge. "I've already heard from automakers and food grocers. This is really a serious cause for concern," said Canadian Transport Minister Omar Alghabra.

The entire protest is about the Trudeau government's decision that those crossing the Canada-US border need to be fully vaccinated. This could potentially mean that truckers who are not fully vaccinated will have to go into quarantine which in turn could cause a shortage in truck drivers.

A coalition of trucker associations and Conservative groups have come together against the vaccine mandate with protests erupting in Ottawa and Toronto.