Toyota’s Yaris is finally here in India. With a Honda City-like expected price of ₹9 lakh to ₹14 lakh (ex-showroom, Delhi), it isn’t likely to be cheap. But if what the Toyota brand stands for appeals to you, the Yaris is a car you should keep on your shortlist.
By : Autocar
| Updated on: 22 Apr 2018, 09:31 AM 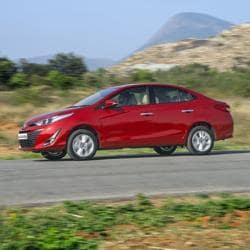 Toyota Yaris will be available in a petrol engine only, with both manual and automatic versions.

Toyota has been eyeing the Honda City and Hyundai Verna space for a long time coming. The car that would help it fight the Honda and the Hyundai was often on the list of hopefuls but was dropped generation after generation for one reason or another. The car in question is the Toyota Yaris and it is finally here in India. Toyota will commence serial production of the car at its plant in Bidadi near Bengaluru later this month, and it will be available with a petrol engine only. It will, however, get both manual and automatic versions right from the word go, and because the car is locally produced, Toyota is likely to price it competitively alongside the City. 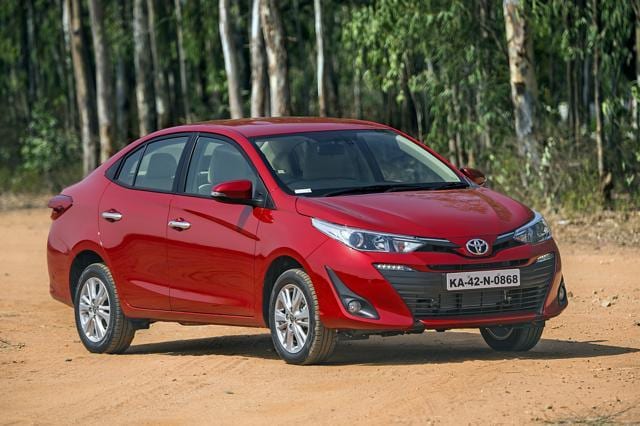 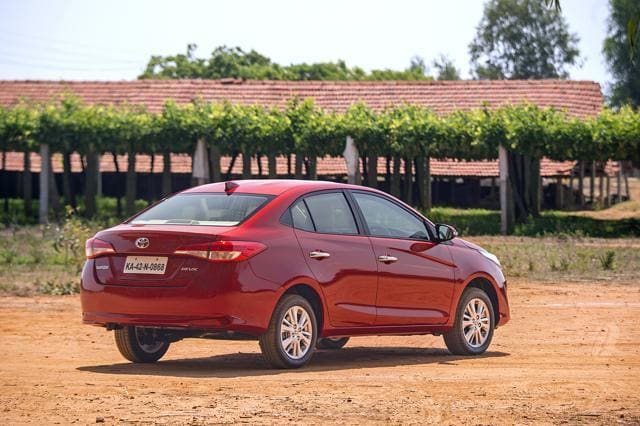 Look at it head-on, and the recently facelifted and updated Yaris is an attractive-looking car. The big black air dam makes the nose of the car look sporty, the headlights and badge gel nicely with the rest of the nose and the sweep of the roof is well executed too. This clearly is no workman like the Etios. Still, out on the road, the Yaris looks a bit smaller in the flesh than you expect. The sedan is based on Toyota's global 'B' platform but differs from the car sold in Europe and other markets. Whereas that car is called the XP130, this built-for- developing-markets car is designated 'XP150'. The ride height on the Yaris has been raised for Indian roads and it now gets taller springs and stiffer dampers. And Toyota engineers have also added acoustic glass windows, and additional sound-deadening material to help reduce engine and road noise. While Toyota's mainstay in India is diesel, the Yaris will only be available with a petrol engine. Putting out a decent 107hp, the 1.5-litre petrol is mated to a six-speed manual or a seven-step CVT automatic.

Safety, however, clearly is the focus. The Yaris comes with a class-leading seven airbags, including a knee bag as standard - on all variants! There are disc brakes on all four wheels (on the V and VX versions), the car gets ESP, there's traction control, and some versions even get a tyre pressure warning system.

Toyota's 1.5-litre engine is smooth at idle. There's almost no rocking motion when you place your foot on the throttle and it is very responsive to that first important tap on the accelerator. So, drive it in a relaxed manner and performance feels effortless. However, ask for a bit more acceleration and it disappoints. The engine is slow to respond, revs build at a leisurely pace and progress is so relaxed, you soon start looking for a lower gear. And this is particularly true when overtaking. What makes the driving experience a bit nicer is that the six- speed manual does a decent job. It is reasonably light to engage gears, only needing an extra nudge or push occasionally, and though the spring-loading on the gear lever is a bit high, selecting gears doesn't take too much effort or attention. The clutch is nicely weighted too. The CVT automatic is even nicer. For those of you who want to take control, there's even a 'manual mode' via the paddles behind the steering. Yes, hitting the left paddle isn't the same as going down a real gear on a traditional gearbox, but the CVT responds so well and shortens the gearing so nicely, it really does feel effective. 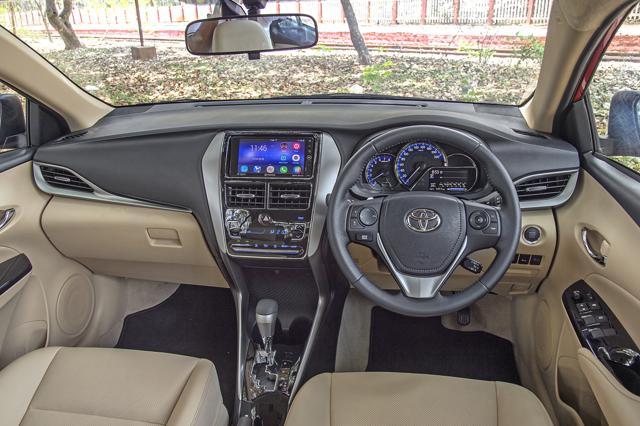 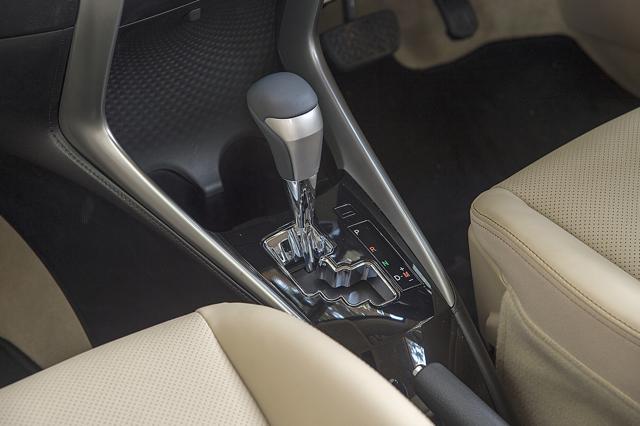 The other area where the Yaris shines is ride quality. Yes, there is a hint of firmness at lower speeds and you can feel the stiffness in the springs when the car rolls over sharp-edged bumps, but once up to speed, comfort is very impressive. The ride is silent; there's no secondary movement even over larger bumps and you can carry a lot of speed over craters, with the Yaris remaining stable and not tossing passengers around like the Verna and City do. Even straight-line stability is very good, and with its disc brakes on all four wheels (V and VX versions), you feel pretty secure at high speeds.

The Yaris, however, isn't really a fun car to drive. Yes, stability is good, the strong brakes allow you to carry a bit of extra speed into corners, and it does hang on gamely once you are in the corner. The steering, however, feels vague and lifeless; there's almost no connection with the front wheels as speeds rise and cross triple- digit figures, and the Yaris feels even more nervy doing relatively everyday things like changing lanes. 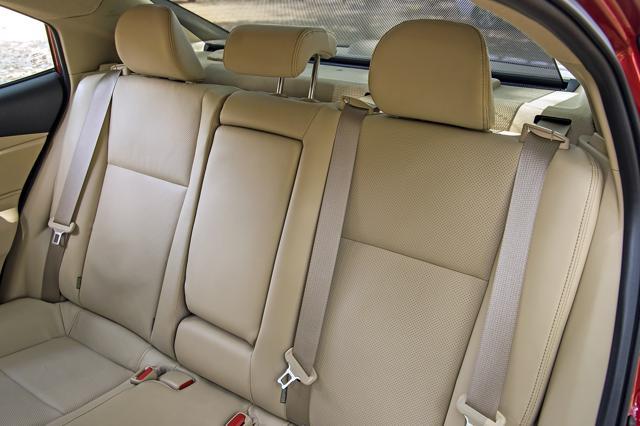 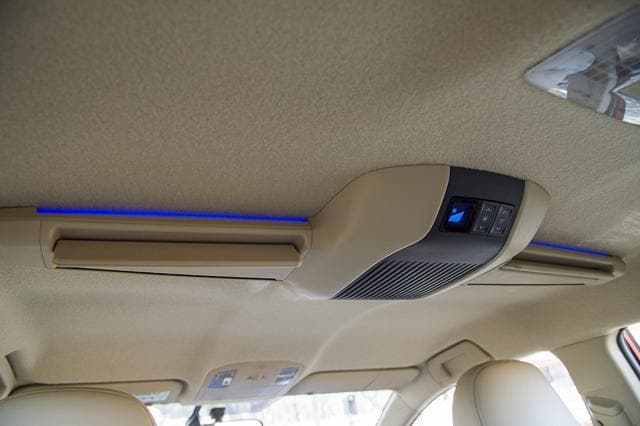 The updated cabin of the Yaris, with its beige and black scheme and 'waterfall' centre console, works well. Using the powered driver's seat to find your ideal driving position clearly makes the Yaris feel like it is from a class above, and what's nice is that the range of adjustment is so wide, even short drivers will be happy. The cabin is typically Toyota, reminding you in places of its bigger sister, the Corolla. The layered dash, the chunky steering wheel, the bulging doorpads; there's a lot that reminds you of Toyota's global bestseller. But there are a few new elements that stand out. The backlit instrument panel with its 4.2-inch colour TFT screen looks extremely attractive, the soft-touch air-con buttons function with a slickness that's very pleasing, and the chrome, black and tan colour palette works so well, it truly does convey a feeling of well-being. 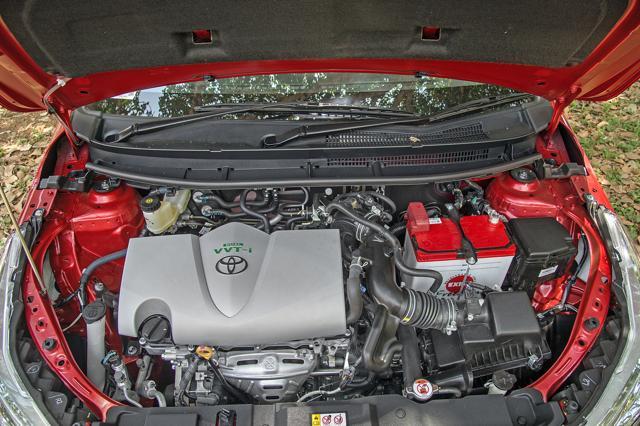 Levels of fit and finish are not class-leading though. There are plenty of hard and unyielding plastics on the dash, and lower down the cabin you go, the worse it gets. The touchscreen with its myriad gesture controls is a nice addition but the car doesn't have Apple Car Play or Android Auto. The boot is also reasonably large at 476 litres and is extremely practical too. The front seats are also extremely comfortable. Side bolstering is nice, shoulder support is first rate and the seats are wide enough for long hours behind the wheel. Rear-seat comfort is also good. There's a fair amount of legroom, the seat base is nice and long, the backrest is nicely reclined and the cushioning on the part-leather seats is also spot on. Headroom, however, is a bit tight if you are over 6ft tall, and though the Yaris does have a good back seat, it isn't nearly as nice as that of the City. Also, while the floor of the cabin is flat, the elbow box does intrude into where the third passenger will be sat. So, despite the Yaris having five three-point seatbelts, this car is best used as a four-seater. The Yaris doesn't get conventional air-con vents at the rear, so Toyota has added a roof-mounted air-con system.

The Yaris is a jack of all trades, it's a car that does almost everything reasonably well. It isn't really fun to drive, and it doesn't really have the best cabin quality, but what you have with the Yaris is a car that will deliver an above-average performance in almost all important areas. No, it doesn't stand out as something special, and with a Honda City-like expected price of ₹9 lakh to ₹14 lakh (ex-showroom, Delhi), it isn't likely to be cheap. But if what the Toyota brand stands for appeals to you, the Yaris is a car you should keep on your shortlist.