Home Auto News Toll Collection On Highways Speed Up After Weeks Of Lull Due To Lockdown: Report

Toll collection on highways speed up after weeks of lull due to lockdown: Report

Reports suggest that while passenger vehicles' movement still remains subdued on highways, freight movement has picked up pace which is contributing to the uptick in toll collection.
By : HT Auto Desk
| Updated on: 17 Jun 2020, 08:33 AM 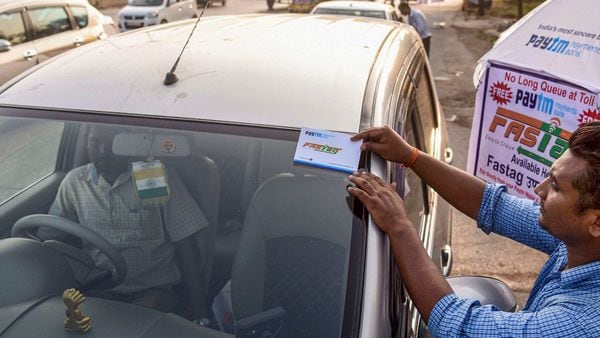 File photo of a worker fixing a FASTag sticker on the windscreen of a car, at Vashi Toll Plaza on Sion Panvel Highway, Mumbai.

Collection at toll booths across Indian highways has started gathering momentum after a sharp decline owing to the national lockdown previously put into place which had resulted in only a trickle of vehicles moving from one part to another.

According to a report in Live Mint, toll collection has reportedly reached around 75% of pre-Covid-19 collection levels, as per industry experts. With restrictions being eased since early June and intra-state and inter-state movement now allowed without the need for any pass or permission, traffic on highways has been steadily climbing. "We’re seeing a nearly 75% return of normal traffic numbers on our assets," an infrastructure developer was quoted as saying on the condition of anonymity. "Toll revenues depend on the kind of traffic combinations, passenger or commercial traffic. The roads where we see more commercial traffic, revenues have picked up faster. Passenger numbers are still a fraction of what they used to be before the lockdown."

States had previously closed border to general movement of traffic during the three-month-long lockdown as people were being urged to remain inside their homes. Only those carrying out essential services and the transport of essential goods were allowed on roads. Reports suggest that while passenger vehicles' movement still remains subdued on highways, freight movement has picked up pace which is contributing to the uptick in toll collection.

Meanwhile, Union Minister Nitin Gadkari said on Tuesday that steps are being taken to revamp National Highways Authority of India (NHAI). NHAI is responsible for developing, maintaining and managing national highways of the country. "We are taking steps for revamp of NHAI....major reforms are needed in the Authority," the Road Transport and Highways Minister said addressing a webinar organised by industry body Assocham.