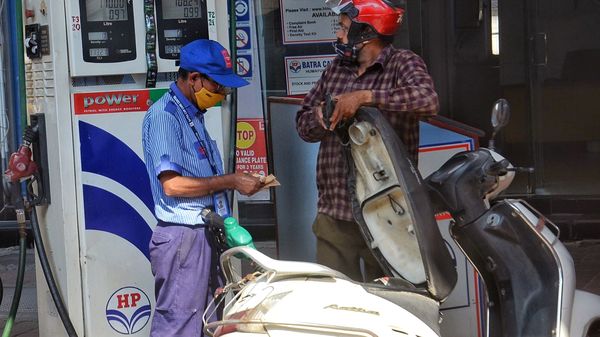 File photo of a petrol pump staff refilling fuel in a two-wheeler used for representational purpose only.

The government of Jharkhand has announced that it will give a major concession on the prices of petrol in the state but only for two-wheelers. A discount of ₹25 per litre will be applied on petrol for motorcycles and scooter riders from January 26, 2022.

The announcement was made by the state's chief minister Hemant Soren whose government completed two years in power today. "Jharkhand government has decided to give a concession of ₹25 per litre petrol to motorcycles and scooter riders," he was quoted as saying by ANI. The facility can be availed by customers for upto 10 litres of petrol.

The chief minister added that the move will benefit two-wheeler riders who belong to poor or middle-class families given the petrol prices are very high since the past few months. “The price of petrol and diesel is increasing continuously, due to which the poor and middle class people are the most affected," he wrote in a tweet.

Petrol and diesel prices across the country witnessed incessant hikes earlier this year, shooting past ₹100 per litre mark in many areas. However, central government's announcement of excise duty cut just ahead of Diwali gave a much-awaited breather to the common people. And the latest move by Jharkhand government will give the two-wheeler riders in a state another breather.

Earlier this month, around 1,400 petrol pumps across Jharkhand remained closed for a day, demanding a reduction in Value Added Tax (VAT) on motor fuels. The strike was called by Jharkhand Petroleum Dealers' Association (JPDA) and received an overwhelming response from the petrol pump dealers. (Read here)