Volkswagen labour leader lashed out at Herbert Diess for his lack of empathy towards workers amid talks of job cuts due to the carmaker's EV plans.Volkswagen had earlier denied reports that there will be 30,000 job cuts.
By : HT Auto Desk
| Updated on: 27 Oct 2021, 03:22 PM 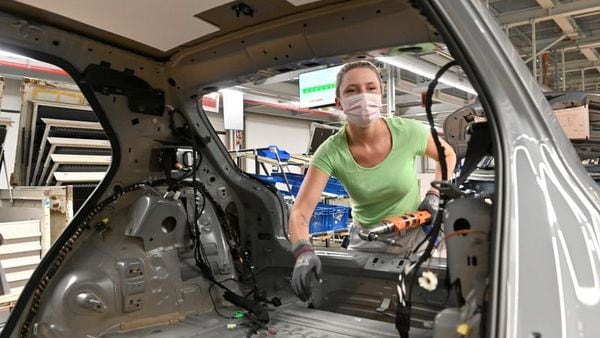 A Volkswagen technician at work at the assembly line of the ID.3 electric car in Zwickau, Germany. (File Photo)

All is not well inside Volkswagen, one of the largest carmaker in the world. Ahead of a crucial supervisory board meeting today, the German auto giant's labour chief has slammed Herbert Diess, Group CEO of Volkswagen, over his lack of empathy towards workers' concerns.

What triggered the outburst was Diess' absence from a meeting with workers on November 4 due to his pre-planned visit to the United States. "The reason for the cancellation is telling. Herbert Diess is preferring Wall Street investors over the company's workforce - this behaviour is unprecedented in the history of our group and once again shows that even in times of crisis the group chief executive has no empathy or sense for the situation of the workforce," said Daniela Cavallo, Head of Volkswagen's works council. "He is simply not taking an interest in the concerns of the workforce," he added.

The reaction is reminder to the recent controversy over reports on possible job cuts by the German auto giant. During the supervisory board meeting held last month, Herbert Diess reportedly said that in order to speed up its electric vehicles game to catch up with Tesla, the company may let go 30,000 workers. While the carmaker denied the reports, it had admitted that the Wolfsburg facility in Germany needs to scale up to meet its EV requirements.

The remarks from Cavallo came after it became clear that Diess will not meet the workers and instead meet with investors and politicians in the United States. However, Diess has invited Volkswagen workers at the Wolfsburg plant tomorrow ahead of announcing the third-quarter results.

The supervisory board meeting to be held today is likely to take up the matter for discussion. The carmaker is planning new investments for the next five years to push its EV games higher to compete with Tesla. Volkswagen had earlier said that Tesla is setting new standards for productivity and scale in Grunheide, where Tesla's first European Gigafactory is being set up. When operational, the facility is expected to have peak capacity between 5,000 to 10,000 cars every week, which itself is more than twice of what the entire EV production was in the country last year.