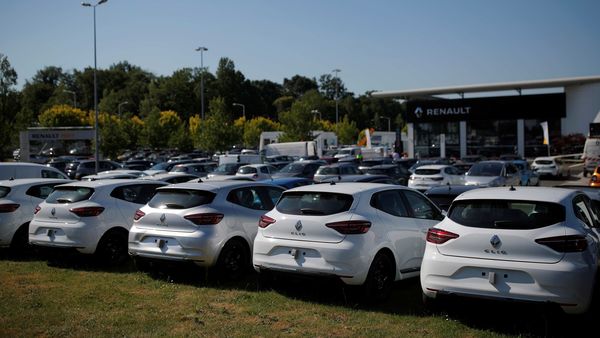 Cars are displayed for sale at a Renault dealership in Nantes, France.

France will impose a new weight tax on heavy cars and sport utility vehicles as part of a plan to get automakers to reduce CO2 emissions, Environment Minister Barbara Pompili said Thursday.

"The weight tax that we're creating sends a strong and necessary message to take into account the environmental impact of the heaviest vehicles," Pompili said on Twitter.

"The heavier cars get, the more materials and energy they consume, with more pollution," she said, adding that bigger cars also took up a disproportionate share of public space.

Her office said that the tax, part of the 2021 budget, would apply to vehicles weighing more than 1,800 kilogrammes (4,000 pounds), at a rate of 10 euros for every additional kilogramme.

It will not apply to electric cars.

The move might not be enough for critics, since the largest SUVs make up only a small fraction of the French market, where the average car weighs around 1,200 kilos.

The best-selling SUVs from Peugeot or Renault, for example, also weigh well below 1,800 kilos.

Only German models from BMW or Audi, which have seen only a few thousand sales in France so far this year according to the CCFA industry group, would be impacted, as well as some large luxury sedans.

A weight tax was among the 150 proposals generated from the "Citizens' Convention on Climate" set up by President Emmanuel Macron, who has promised bold action on tackling climate change.

The convention had pushed for a tax on cars weighing 1,400 kilogrammes or more, "but this still is a step in the right direction," said Gregoire Fraty, one of the participants.

SUVs, which have soared in popularity in recent years, have come under heavy fire from climate change activists.

The WWF reported this month that they had become the second-biggest source for the increase of greenhouse gas emissions in France between 2008 and 2018, second only to the airline industry.

"The 4.3 million sold in France in that decade have the same carbon footprint as 25 million electric compact cars," it said.

French officials blame heavier cars for the slowdown in progress on cutting emissions since 2016.

The average weight of diesel cars has risen seven percent since 2010, and gasoline cars 14 percent, the equivalent of around 100 kilogrammes (220 pounds) per vehicle, according to the French government.

The weight tax "is meant to encourage people to avoid very large and heavy models, but also to encourage the industry to take its entire ecological footprint into account and not just emissions," a ministry source told AFP.