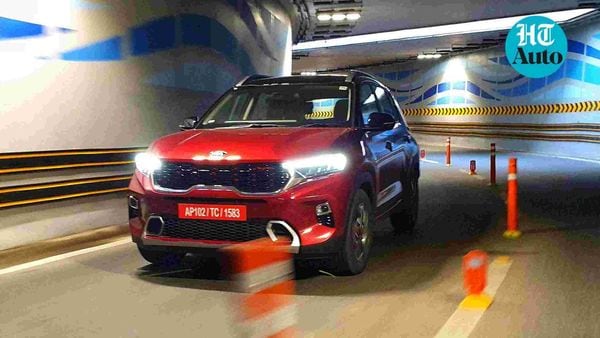 Kia Sonet has taken over from Seltos as the company's most successful offering in India. (HT Auto photo: Sabyasachi Dasgupta)

Kia Motors India on Tuesday reported a substantial 50% year-on-year growth in sales for the month of November by selling 21,022 units and with Sonet maintaining its new-found stranglehold in the sub-compact SUV segment. The Korean car maker sold 11,417 units of Sonet which was launched in the month of September, just ahead of the festive period.

Kia has managed to shift to top gear with just three products in its current India portfolio with Sonet quickly taking over the place of prominence from Seltos, the debut product when the car company came knocking on India's doors back in August of 2019. Carnival luxury MPV is the third product from Kia which was launched early 2020. "I am delighted to witness the wide acceptance we have received in India for our vehicles," said Kookhyun Shim, Managing Director & Chief Executive Officer, in a press statement issued by Kia Motors India. "While there is still a lot of uncertainty in the market due to the pandemic, the overall consumer sentiment has significantly improved and we are all prepared to offer a safe and hassle-free ownership experience to our customers."

For a company that is only a little over a year old in the country, Kia's rise has been impressive because it has been emphatic. Sonet has been loaded to the brim with features and a number of engine and transmission options. Backed by looks that has found favour among many buyers, the car has been selling like hot cakes since its launch. That Seltos laid a solid foundation has also helped Sonet's cause.

Kia is now also looking at further bolstering its post-sales network and while a part of the focus is to ensure uninterrupted production at its Anantapur plant as the country's economy continues to open, a solid service network in more and more cities and towns of India may well ensure this momentum is sustained.