Scooters outsell bikes for 7th year, Activa is the new No 2

Domestic scooter sales in India outpaced motorcycles for the seventh consecutive fiscal year in 2013-14, and Honda Activa displaced Hero Passion as the second-largest selling two wheeler in the country.
By : Hindustan Times
| Updated on: 21 Apr 2014, 13:52 PM

Scooters outsell bikes for 7th year, Activa is the new No 2

Domestic scooter sales in India outpaced motorcycles for the seventh consecutive fiscal year in 2013-14, and Honda Activa displaced Hero Passion as the second-largest selling two wheeler in the country.


While Splendor retained its position at the top, Activa's sales of 1.67 million units in 2013-14, a growth of 39%, put it ahead of Passion's 1.45 million units. Scooters grew at a much faster clip than motorcycles at 23% year-on-year, easily outpacing the 3% growth of motorcycles. 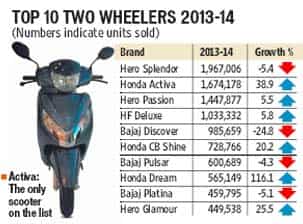 The high growth of scooters is on a much lower base — the overall market is almost a third of motorcycles — but this was the seventh consecutive year scooter sales grew faster. Activa also outsold India's largest selling two wheeler for over a decade, the Splendor, for two months — in September and March.

'The high growth of scooters in India has primarily been led by Honda,' said YS Guleria, vice-president, sales and marketing, Honda Motorcycles and Scooters India. 'In the last few years scooters have evolved and become more technologically advanced, fuel efficient and stylish. It is also more versatile compared to a motorcycle as it allows more space for storage.'

Scooters have been the preferred choice of women, and urban centres are the prime drivers of this growth with 65-70% of sales coming from metros and tier-II cities. But the recent trend of male-centric scooters such as the Yamaha Ray Z, Hero Maestro and TVS Jive has also helped.

With a bigger 125cc variant of the Activa set to hit the market later this month, Honda looks poised to challenge the Splendor for pole position, even as Hero MotoCorp launched a new version of Splendor that it hopes will help the brand grow.

'The top three bikes in the country are from Hero and two of the top three scooters also,' said Anil Dua, senior vice president sales and marketing, Hero MotoCorp. 'We were a predominantly motorcycle company but since 2006 we have helped rekindle the scooter segment with Pleasure and Maestro.'