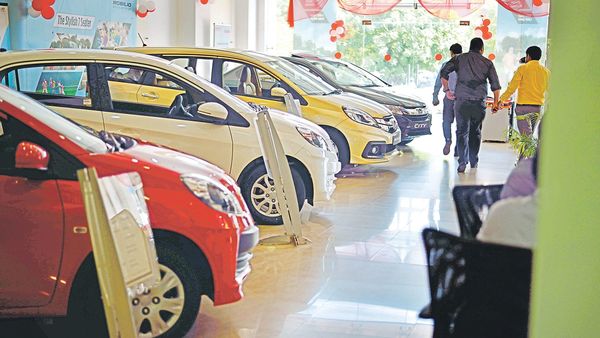 Retail sales growth has been sliding since August last year amid tightening credit, dismal customer sentiment and a lack of clarity in the transition towards BS 6 emission norms.pradeep gaur/mint

NEW DELHI : Automobile sales are likely to remain on a slippery path in the coming quarters despite a faint uptick seen in the last two months, top company executives said, adding that they won’t raise production anytime soon because of sluggish consumer demand.

Retail sales growth has been sliding since August last year amid tightening credit, dismal customer sentiment and lack of clarity in the transition towards BS-VI emission norms.

Between April and November, wholesales of passenger vehicles across categories declined by 17.9% year-on-year, while two wheelers dropped by 15.7% and commercial vehicles fell by 22.12%.

“We have to carefully watch how the consumer will react and that’s the reason why we are cautious and not taking a position on whether there will be a change in the demand (improvement in sales) in the industry," said Shashank Srivastava, executive director, marketing and sales, Maruti Suzuki India Ltd. “We don’t have a crystal ball to say by when the recovery will start."

A senior executive of a carmaker said that as of now manufacturers are only producing enough to meet retail demand.

Transition to BS 6 emission norms have also caused confusion among customers, but that is likely to improve in the coming months, industry officials said.

Discounts and government assurances on BS 4 vehicles—that they will be able to run the full term of registration—bumped up sales for all carmakers in November, including a 19-20% year-on-year rise in Maruti’s retail sales during the 42-day festival period spanning Navratri and Diwali.

“The customer will take time to understand and accept the BS 6 norms, once they are implemented in the market," S.S. Kim, managing director, Hyundai Motor India, said in an interview. “I would say demand will grow gradually from the second half of next year. We will introduce new BS 6 products gradually in the coming months, and our factory will be busy in this transition (in Q4FY20)," he said.

The key to a sustainable recovery will depend on how soon growth picks up in the overall economy, rather than emission norms, industry officials said. That is unlikely to happen before the second half of the next fiscal year “since the last quarter of this fiscal year remains full of uncertainties", he added.

“The gross domestic product (GDP) growth is not what we had hoped for. So, while in the first half of the year there has been deferral of vehicle purchases, now customers have started buying again," said Martin Schwenk, managing director and chief executive, Mercedes Benz India, while noting that the transition to BS 6 will remain an important factor.

Lack of sufficient availability of diesel, on which BS 6-compliant vehicles can run, have also impeded sales of vehicles. The fuel is likely to be available only from end-March, which has again created uncertainty for sales of automobiles, said a senior industry executive.

“Though, in commercial vehicles, pre-buying is expected. A positive turn in sales or dispatches in the January-to-March quarter will be quite a bonus," the person added.

Meanwhile, demand for two-wheelers and passenger vehicles this month may have turned marginally negative, according to brokerage Motilal Oswal, ahead of the transition to BS 6.

Given a lack of liquidity following the collapse of Infrastructure Leasing and Financial Services, the overall road to recovery is likely to remain on a bumpy track, industry officials said.