Available in 4 variants— RXE, RXL, RXT, RXZ, the Renault Triber will be manufactured at the company’s factory in Chennai. It will be available in the company’s 350-odd dealerships across the country.
By : New Delhi
| Updated on: 28 Aug 2019, 01:33 PM 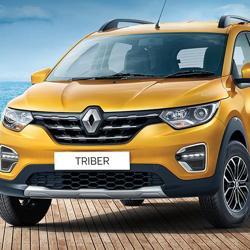 The Renault Triber is powered by a one-litre petrol engine

Renault Triber, the lastest car from the Freach auto major, was launched in India on Thursday. The seven-seater Triber is priced Triber priced between ₹4.95 lakh and ₹6.49 lakh. It will compete against Maruti Suzuki's Swift and Hyundai's Grand i10 Nios in this segment.

Available in 4 variants— RXE, RXL, RXT, RXZ, the Triber will be manufactured at Renault's factory in Chennai. It will be available in the company's 350-odd dealerships across the country.

Triber is the second model from Renault after the Kwid that has been specifically developed and designed for the Indian market. The Renault Triber is powered by a one-litre petrol engine and comes equipped with various features.

The Renault Triber has quite a large cabin for a car in this segment. There is ample headroom even for passengers in the third row which is a rarity and welcome change. The interiors are finished in a dual tone— black and beige.

As far as safety is concerned, the Triber offers four airbags, two in the lower-priced models. The four air bags at the premium model are at the driver, passenger, and front sides. Rear parking sensors and reverse camera, a standard nowadays, is found in the Renault Triber too.

"We foresee Triber to be a key part of our expansion plans in India," Renault India Operations Country CEO and MD Venkatram Mamillapalle said at the launch on Wednesday.

He added that Renault is focusing on rural areas for growth in In dia. "We see tremendous potential in rural markets. Triber will appeal not only to urban customers, but rural ones as well," Mamillapalle said.

The Indian auto industry is witnessing a slumping in sales which has led massive job cuts. Auto sales declining for the ninth straight month in July, that has led to some manufacturers temporarily halting production to keep costs in check.

On Friday, finance minister Nirmala Sitharaman announced some measures to help the auto industry. These included lifting the ban on purchase of new vehicles by the government departments, an additional 15% depreciation on vehicles acquired from now till March 2020 being allowed. Sitharaman also said that BS IV vehicles purchased till 2020 will remain in operation for the entire period of registration, allaying fears that such vehicles will be forced out of the roads.