The Renault and Nissan facility in Chennai was shut down for the last few days amid workers' protests against coming to work amid lockdown.
By : HT Auto Desk
| Updated on: 31 May 2021, 09:38 AM 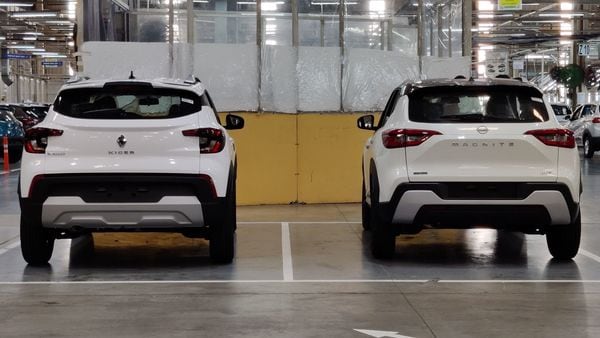 Kiger from Renault (L) and Nissan Magnite stand next to each other at RNAIPL facility.

Renault and Nissan are unlikely to resume operations at its Chennai facility from today, as was earlier announced by the Alliance partners. The workers' union at the facility has sent a letter to the company saying that employees will not turn up for work on Monday, according to sources.

The letter, accessed by news agency Reuters, said, "It will not be secure for workers to report to work on Monday the 31st of May, 2021." According to sources, the workers' union would continue to discuss its demands with the two carmakers today.

Last week, French auto giant Renault and Japanese carmaker Nissan Motor had decided to hit a pause at their Tamil Nadu facility till Sunday (May 30) after workers staged protest against entering the facility amid strict lockdown due to Covid-19 crisis.

So far, four of the workers at this facility have died, while more than 400 others tested positive this year. The workers' union have alleged that there is no adequate social distancing measures at the facility at a time when Covid-19 cases are on the rise. They have also demanded rehabilitation for the kind of the workers who have died due to the virus and also asked for medical treatment of workers who test positive.

The union had also demanded vaccination for all employees working at the facility. It said that Renault-Nissan has so far vaccinated only 200 workers out of 8,000 workforce with the first dose. Nissan had said it had vaccinated employees over 45 years and is open to vaccinate those under 45 depending on availability of doses.