The dispute underlines the struggling company’s difficulties in cutting costs in France, a key part of Chief Executive Officer Luca de Meo’s turnaround plan.
By :
| Updated on: 30 Apr 2021, 09:25 AM 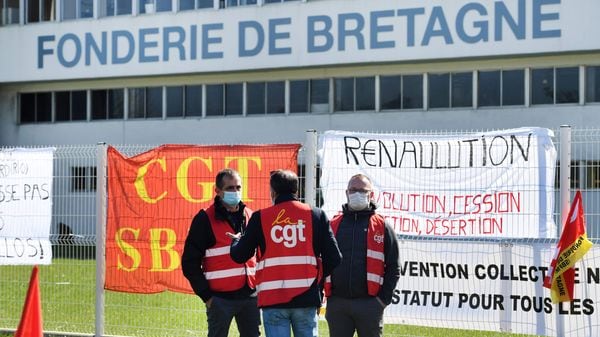 Workers led by the CGT union demonstrate against a plan by Renault to sell the Fonderie de Bretagne in Caudan. (File photo)

Renault SA workers blocked a car-parts site in western France for a third day in a standoff that could jeopardize cost-cutting plans as the government grows anxious on automotive jobs.

Workers led by the CGT union demonstrated on Thursday against a plan by Renault to sell the Fonderie de Bretagne in Caudan that makes cast-metal parts for combustion engines. The factory halted production after access was blocked, following a so-called boss-napping incident on Tuesday when local managers were detained into the night.

The sale of the factory “is a betrayal," CGT union leader Mael Le Goff said in a video posting. Productivity and flexibility have risen and Renault should keep the site, he said.

The dispute underlines the struggling company’s difficulties in cutting costs in France, a key part of Chief Executive Officer Luca de Meo’s turnaround plan. It has also sparked mounting concern within the government -- the carmaker’s most powerful shareholder -- about the effects on jobs as the shift to electric cars accelerates.

Renault rival Stellantis NV, which also counts the French state as a shareholder, this month caved to government pressure to keep production of a combustion engine in France. On Thursday a finance ministry official said the country suffers from a productivity gap in the foundry sector and that the government is stepping up efforts to consolidate and retrain workers.

As many as 5,000 jobs could be at risk by the end of the decade at French auto foundries out of roughly 13,500, according to the ministry, citing outside studies. Another 30,000 positions could be lost by mid-decade among car-parts suppliers.

Renault said it would sell the auto foundry last year as part of a plan that includes voluntary departures of some 4,600 workers in France and the phasing out of car assembly at the Flins factory outside Paris.

The company has fallen far short of its staff reduction goal and the unrest at Caudan presents yet another difficulty. In a bid to reassure investors, De Meo said last week a cost-cutting target may be reached this year.

The search for a buyer of the Caudan site is ongoing, a spokesman said Thursday.

The government tried to ward off an escalation of the dispute earlier this week when Finance Minister Bruno Le Maire announced a fund dedicated to job retraining for auto foundry workers.