Red Light On, Gaadi Off: Delhi to deploy 2,500 environment marshals at signals

Delhi government is urging motorists to turn off ignition of their vehicles while waiting at traffic signals.Delhi is once again at the cusp of worsening air quality levels.
By : PTI
| Updated on: 20 Oct 2020, 08:17 AM 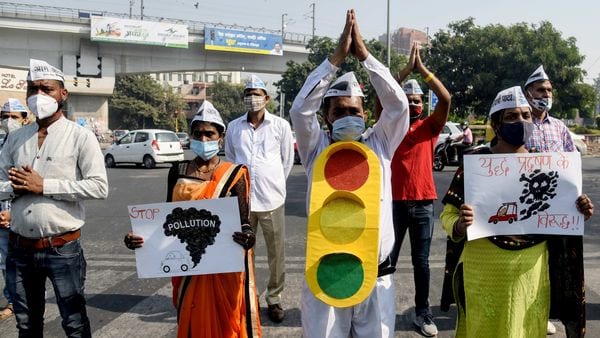 Aam Aadmi Party party workers hold placards as they urge people to turn off the engines of their vehicles while waiting at traffic signals, during a campaign launched by Delhi Chief Minister Arvind Kejriwal.

The Delhi government will deploy 2,500 environment marshals across the city to generate awareness about its recently launched anti-pollution campaign, 'Red Light On, Gaadi Off', Environment Minister Gopal Rai said on Monday.

These marshals will be deployed at 100 traffic signals across Delhi's 11 districts, he said.

Addressing reporters, Rai said the shortlisted traffic signals are those where the red light is two-minute long.

"From October 21 to November 15, a ground-level awareness drive on 'Red Light On, Gaadi Off' campaign will be launched at 100 traffic signals. We are in the process of appointing 2,500 environment marshals who will spread awareness about the campaign at these signals. It is an awareness drive, not an enforcement drive," he said.

"This campaign is targeted at initiating a behavioural change. It is an awareness campaign and not enforcement. It is the campaign of the 2 crore people in Delhi, people who are concerned about the catastrophic consequences pollution can have amidst the ongoing pandemic. This campaign is about taking ownership," he said.

The marshals will be working in 2 shifts, and 10 of them will be positioned at each traffic point. The first shift will be from 8 am to 2 pm and the other will be from 2pm to 8pm, Rai said.

He said the Delhi government will write to all MPs, MLAs, councillors, RWAs, industrial and other social agencies to take part in this campaign.

This campaign will be effective from morning 8 am till evening 8 pm. For this, Transport and Traffic police have identified and submitted a list of a select group of 100 major traffic points from 11 districts, he said.

"The marshals will adopt the principle of 'Gandhigiri'. They will give red roses to those not switching off the ignition at red lights. They will be made aware as to why it is important for them to do it and how they can fight pollution through the move," he added.

The ''Red Light On, Gaadi Off'' campaign was launched by Chief Minister Arvind Kejriwal on October 15.

Experts say on an average a vehicle stops at a red light for 15-20 minutes in a day, consuming 200 ml of fuel, creating pollution.