The turnaround comes ahead of PSA's merger with Fiat Chrysler (FCA), due to close early next year.The carmaker has focused increasingly on its more expensive and profitable models, helping it ride out falls in sales volumes.
By :
| Updated on: 28 Oct 2020, 02:57 PM 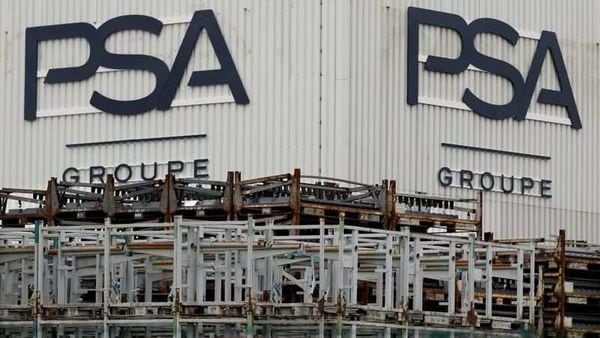 FILE PHOTO: The logo of PSA Peugeot Citroen is seen at the company's plant in Poissy, near Paris.

Peugeot maker PSA Group on Wednesday posted a 0.8% decline in its third-quarter sales, though revenue from its core autos division returned to growth after slumping during coronavirus lockdowns.

The turnaround comes ahead of PSA's merger with Fiat Chrysler (FCA), due to close early next year, although a resurgence in the Covid-19 pandemic could lead to fresh restrictions on movements and stores in Europe before then.

PSA's shares were down 2.8% in early trading, even though the group beat expectations on revenue by a wide margin, analysts at Jefferies said. Other French stocks were falling, as the country braces for a possible renewed lockdown.

Under CEO Carlos Tavares, PSA has focused increasingly on its more expensive and profitable models, helping it ride out falls in sales volumes.

PSA reported overall sales at 15.5 billion euros ($18.3 billion) for the July-September quarter, down 0.8% from a year earlier. Automotive revenue rose 1.2% to 12 billion euros, after ending the first half of the year down 35.5%.

Car sales volumes fell, even as dealerships re-opened after lockdown measures eased, but this was offset by the popularity of higher priced models - a model PSA's French rival Renault is trying to emulate as part of its turnaround plan.

PSA had said over the summer that new versions of its Peugeot 208 model and Opel's Corsa were boosting its order books, and its focus on SUV-style cars has also helped.

PSA kept its target to reach an adjusted operating margin for its automotive division of more than 4.5% for 2019-2021, and said it would likely generate positive cash flow this year.

The group's $38 billion merger with FCA, set to create the world's fourth largest carmaker under the name "Stellantis", is due to close in the first quarter of 2021.

They are set to win antitrust approval for the merger from the European Commission, sources told Reuters this week.

The companies said on Wednesday they had pressed on with one more step in the process, after their boards agreed PSA could sell up to a 7% stake in car parts maker Faurecia.

The proceeds will be distributed to Stellantis shareholders in cash, alongside a distribution-in-kind of the remaining Faurecia stake - a structure aimed at preventing Stellantis from gaining control of Faurecia.