Patna is the new state capital ready to join the list of cities where petrol price has breached century mark.Mumbai is the metro city with highest petrol price at ₹103.36 a litre.
By : HT Auto Desk
| Updated on: 20 Jun 2021, 10:40 AM 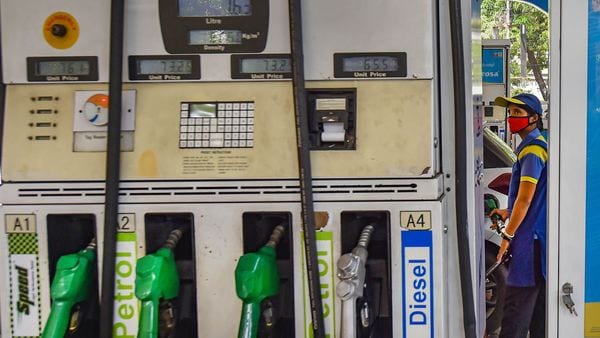 Currently, petrol is costing more than ₹100 a litre in eight states and union territories.

Petrol and diesel prices on Sunday has been increased to a new height. After a day of pause in price hike, the oil marketing companies have increased the rates of both the motor fuels on Sunday. Petrol has become costlier by 29 paise and diesel became pricier by 27 paise.

Currently, petrol is costing more than ₹100 a litre in eight states and union territories. These are - Rajasthan, Madhya Pradesh, Maharashtra, Andhra Pradesh, Telengana, Karnataka, Jammu and Kashmir and Ladakh.

With the latest price hike on Sunday, Patna is about to join the list of state capitals where a litre of petrol price has crossed the century mark. Bhopal became the first state capital to witnessing petrol price breaching ₹100 barrier, which was followed by Jaipur, Mumbai, Hyderabad, Bengaluru.

The sky-high petrol and diesel price is directly impacting the sales of automobiles in the country. Not only the motorists, non-motorists common people too are being impacted by the increased price of fuels. The transportation sector is the largest user of diesel and with the high rate of diesel, transportation cost has increased substantially. This has led to higher cost of consumer goods and durables, resulting in burning common people's wallets.

The price hike rally was started earlier this year in February, right after the Union Budget 2021. Since then the price of petrol and diesel have been increasing incessantly.