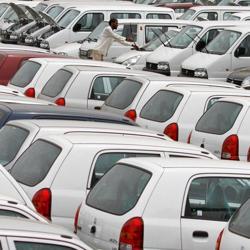 This is the worst-ever fall for both the categories since SIAM started recording the data in 1997-98.

The crisis in the Indian auto sector is deepening. The monthly passenger vehicle and car sales recorded its steepest ever fall in August, a record fall in 10th straight month.

This is the worst-ever fall for both the categories since SIAM started recording the data in 1997-98. Truck and bus sales dropped 39%. Two-wheeler sales fell 22% to 1.5 million units.

Maruti Suzuki, India's largest carmaker, had last week said it has suspended production at its Gurugram and Manesar plants in Haryana for two days. Maruti Suzuki has closed both plants simultaneously for two days for the first time.

The slump in auto sales had led to massive job loss in the sector. Automakers, parts manufacturers and dealers have laid off about 350,000 workers since April, Reuters reported.

Decoding the auto sector meltdown: Causes, effects and the way ahead

Last week, transport minister Nitin Gadkari had assured automakers that there were no plans to ban petrol and diesel vehicles. Gadkari said the the auto sector is witnessing a slowdown due to the global economic factors and said the finance ministry will find out a solution. He also assured the auto sector that their demands for reducing the sales tax on petrol and diesel will also be taken up with the finance ministry.

Finance minister Nirmala Sitharaman had announced some measures to address the slowdown in the auto industry. She lifted the ban on purchase of new vehicles by government departments and allowed an additional 15% depreciation on vehicles acquired from August to March 2020. She also announced that BS IV vehicles purchased till 2020 will remain in operation for the entire period of registration.