The Mahindra XUV700 Javelin Gold Edition is being gifted to the gold medal winners of the Tokyo Olympics 2020.The XUV700 Javelin Edition features a golden hue at the front vertical grille slats, rear decals, and the Mahindra brand logo.
By : HT Auto Desk
| Updated on: 31 Oct 2021, 01:45 PM 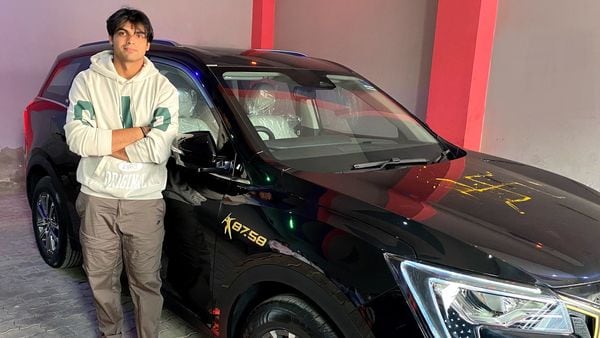 Mahindra has delivered a customised XUV700 to Olympian Neeraj Chopra who became the first Indian to win a gold medal in athletics at the Tokyo Olympics 2020. The athlete took to Twitter to share an image of him posing with an XUV700 Javelin Gold Edition that the automaker specially personalized for the gold medal winners of the sports event.

Chopra thanked the company's chairman Anand Mahindra for his “new set of wheels with some very special customisation!" He wrote, “I'm looking forward to taking the car out for a spin very soon." In the picture shared by the gold medalist, the side of his car can be seen donning a javelin-throwing graphic along with the mention of his record throw distance - 87.58m.

Mahindra responded to Chopra's Twitter post by saying, “You made the country proud @Neeraj_chopra1. We hope the XUV, our Chariot of Champions, will make you proud."

You made the country proud @Neeraj_chopra1 We hope the XUV, our Chariot of Champions, will make you proud. https://t.co/ZJBrEkmpjx

The new XUV700 Javelin Edition has been created in honour of the Olympic gold medalists and features a special paint livery. The car's front vertical grille slats, rear decals, and the Mahindra brand logo feature a golden hue. On the inside, the car features a golden treatment too that compliments its exterior golden theme. The rest of the mechanical and technical features of the vehicle remain unchanged.

Mahindra's flagship XUV700 SUV has already received more than 65,000 bookings since its launch. Deliveries of the SUV to customers are have already started and the automaker is aiming to deliver at least 14,000 XUV700s by January 14 next year. The SUV costs in the range of ₹12.49 lakh to ₹22 .89 lakh (ex-showroom).