While Ola and Uber provide a livelihood for thousands of drivers in India, those drivers are not deemed employees which means they do not get monthly salaries and several other employment benefits.
By : Reuters
| Updated on: 26 Mar 2020, 08:51 AM 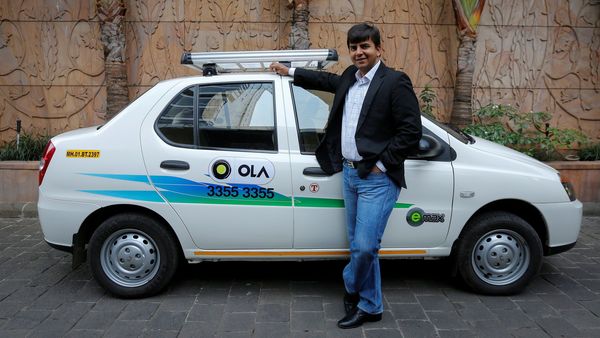 FILE PHOTO: Bhavish Aggarwal, CEO and co-founder of Ola, an app-based cab service provider, poses in front of an Ola cab in Mumbai.

Indian ride-hailing company Ola, backed by Softbank Group, wants loan waivers for drivers and a delay in tax payments to make up for lost income due to the coronavirus outbreak, according to a source and document seen by Reuters.

India imposed a 21-day nationwide lockdown from Wednesday to limit the spread of the virus which has infected more than 600 and claimed 10 lives in the country of over 1.3 billion people.

Ola, which like its rival Uber Technologies, has thousands of drivers in India, wants short-term, interest-free loans for taxi aggregators to meet their working capital needs as well as a six-month delay in paying certain taxes to the government, according to the contents of a letter seen by Reuters to India's federal think-tank and industry lobby groups.

"Mobility as a public utility service is the worst hit during these stressed times," Ola said in the letter.

"The driver partners associated with ride-hailing companies who are dependent on such services for their daily livelihoods are already experiencing a near-complete loss of income," it said.

Ola is also seeking the government's help to secure a 12-month "holiday" on car loan repayments to ease the current pressure on drivers, and set up a fund for those who have lost their daily income.

While Ola and Uber provide a livelihood for thousands of drivers in India, those drivers are not deemed employees which means they do not get monthly salaries and several other employment benefits.

A majority of the 2 million vehicles on Ola's platform are owned by drivers, many of whom take loans to fund the car's purchase. The money they earn ferrying passengers is used to meet loan repayments and other personal expenses.

The company also owns a fleet of tens of thousands of cars which drivers can take on lease by paying a weekly rental of about 5,200 rupees ($68). Ola said it has waived the rental for drivers.

It did not directly comment on the letter but said in a statement it is providing certain insurance and medical benefits to its drivers as well as waiving rental charges.

Ola, one of Softbank's biggest bets in India, plans to make submissions to other ministries for help, including finance and road transport, said a source who has direct knowledge of the matter.