NH-24 at Ghazipur closed for commuters due to farmers' protest 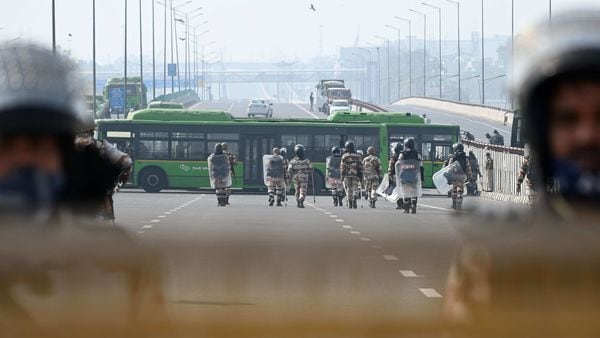 Security personnel stand guard along a blocked highway as farmers continue to take part in a protest against the central government's recent agricultural reforms at the Delhi-Uttar Pradesh state border in Ghazipur.

Amid farmers travelling in huge numbers to join anti-farm law protests at the Ghazipur border, the NH-24 highway has been closed by the Delhi Traffic Police on Saturday.

"Both carriageways of NH-24, to and from Ghaziabad and Ghazipur border, have been closed," informed the Delhi Traffic Police on its official Twitter handle.

It also issued precautions to be followed in wake of the COVID pandemic asking the people to wear masks, maintain social distance and keep hand hygiene.

Traffic movement along NH-9 and NH-24 carriageways towards Ghaziabad was earlier opened on Friday.

Meanwhile, the Centre has extended the deployment period of four companies of Rapid Action Force (RAF) till 4th February to maintain law and order in Ghaziabad in view of the farmers' protest.