Carmaking is a pillar of Mexican manufacturing and accounts for nearly 3% of gross domestic product.
By : Reuters
| Updated on: 12 Mar 2020, 08:48 AM 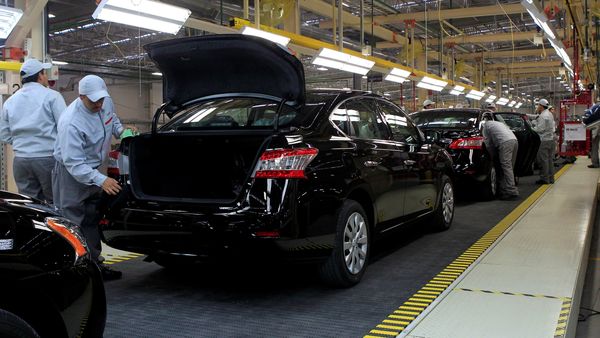 Employees work at a production line before the opening of Nissan's new plant in Aguascalientes, Mexico.

Some of Mexico's auto factories may have to suspend production in the coming weeks as the coronavirus disrupts shipments of key parts from China, according to local officials, in what would be another blow to the stagnant Mexican economy.

Manuel Gonzalez, economic development minister of Aguascalientes, one of a dozen Mexican states that have car factories, said some manufacturers had already told him they were running low on parts.

"I've been in contact with some important companies: They tell me that they have inventory through the second or third week of March," Gonzalez told Reuters. "If that supply is not normalized, we will probably see firms suspending production."

The fast-spreading coronavirus outbreak has rippled through the global economy and upended supply chains. More than 119,100 people have been infected by disease and 4,298 have died, the vast majority in China, according to a Reuters tally.

If Mexican automakers were forced to suspend production, that would not bode well for President Andres Manuel Lopez Obrador's plans to lift Latin America's second-largest economy out of a mild recession.

Carmaking is a pillar of Mexican manufacturing and accounts for nearly 3% of gross domestic product. According to the International Organization of Motor Vehicle Manufacturers, Mexico is the world's seventh biggest car producer.

Nearly 80% of Mexican-made vehicles are shipped to its top trade partner, the United States.

Aguascalientes, a hub of Mexican car manufacturing in the central part of the country, is home to two plants owned by Nissan Motor Co, one by Mercedes-Benz, and a Daimler and Renault-Nissan Alliance joint-venture complex.

Nissan has started sending parts by plane to its Mexican plants instead of by ship, despite an increase in cost, to avoid any setbacks to production, said Nissan Mexico corporate communications director Luciana Herrmann.

"We're monitoring the situation and we have not confirmed any significant impact," said Herrmann, adding there was no information of an impending production stoppage.

Cuitlahuac Perez, head of Aguascalientes' automotive cluster, which promotes the industry, said Nissan executives have said their plants only have inventory for the next three weeks due to problems with supplies from China.

"If the shipment of components is not normalized in the next three weeks, then in more or less a month they're going to begin suspending production here in Aguascalientes," said Perez.

He added that he had also heard of similar supply problems in other car manufacturing hubs such as Guanajuato and Chihuahua in northern Mexico.

Mauricio Usabiaga, the economic Development minister of Guanajuato state, said he had not received news of any impact on carmakers in his state.

Officials in Chihuahua state did not respond to a request for comment.

Asked about possible impacts on production, a spokesman for General Motors Co, which has a plant in Silao, Guanajuato, said the company was operating normally.

A spokeswoman for Ford Motor Co, which has plants in the states of Sonora and Chihuahua, could not immediately comment on the matter.

The problems with parts supply from China is already having an impact elsewhere in Latin America. Brazilian automakers' association Anfavea on Friday warned that carmakers there might have to suspend production in April due to a lack of parts from China.