Mahindra facilities will be shut for at least four days this month, which was earlier planned for June.The scheduled maintenance will happen across its divisions in a phased manner.
By : HT Auto Desk
| Updated on: 03 May 2021, 03:45 PM 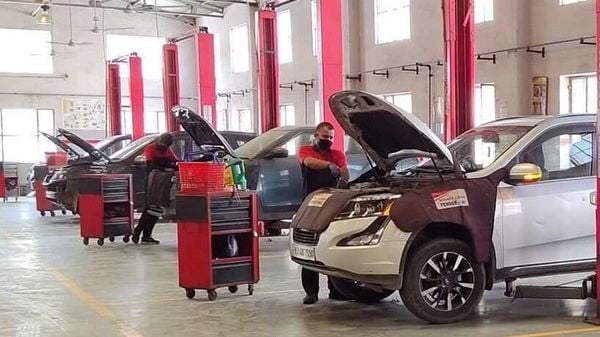 Mahindra to halt production amid Covid surge, prepones its scheduled maintenance from June to May, (File photo)

Indian vehicle manufacturer Mahindra and Mahindra has announced that it has decided to prepone the scheduled maintenance of its facilities from June to this month. The decision has been taken due to the evolving Covid situation in the country.

Mahindra and Mahindra issued a statement today regarding the decision in a BSE filing. It also said, "The Company has scaled up its efforts to ensure health and safety of its employees, associates and supporting ecosystem."

The statement issued by Mahindra also read, "The Company continues to work closely with its Dealers and Suppliers to minimise the impact of disruption in operations due to localised lockdown restrictions in various parts of the country."

Mahindra is one of the few carmakers in India which has been quite actively helping out the society during the ongoing crisis. Since last year, Mahindra has been providing helps with face-shields, ventilators. Recently, the carmaker has also undertaken an initiative called 'Oxygen on Wheels'. The group's chairman Anand Mahindra has deployed several Bolero pickup trucks to deliver oxygen cylinders to different parts of Maharashtra when the states are facing a crunch.

Other carmakers like MG Motor, Toyota Kirloskar Motor, two-wheeler manufacturers like Hero MotoCorp and Honda Motorcycle and Scooter India (HMSI) have also announced similar shutdowns recently. While such halts in production are mostly the result of strict lockdown-like restrictions imposed across several states in the country, they also are indications that demands have dipped due to the ongoing crisi