Mahindra's new Chief Design Officer Pratap Bose gave a clear hint on Twitter after social media was flooded with suggestions from users to offer a special edition XUV700 SUV in the honour of Neeraj Chopra.
By : HT Auto Desk
| Written By : Sabyasachi Dasgupta
| Updated on: 08 Aug 2021, 08:17 AM 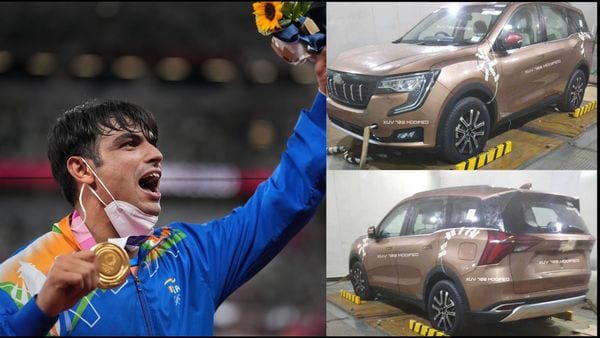 Mahindra has decided to gift XUV700 SUV to Neeraj Chopra, who won India's first medal at the Olympics track and field events in more than 120 years and their second gold in individual events at the Games after shooter Abhinav Bindra.

A day after announcing XUV700 as reward for Neeraj Chopra for his historic feat at the Tokyo Olympics 2021, Mahindra and Mahindra has hinted that there could be more in coming days. Mahindra may be planning a special edition of its upcoming flagship XUV700 SUV to honour Neeraj Chopra.

Bose’s reaction comes after social media was flooded with suggestions from users to offer a special edition XUV700 SUV in the honour of Neeraj Chopra.

Neeraj Chopra won Gold medal in the Men’s Javelin final at the Olympics 2021 on Saturday, becoming the first Indian athlete to win a medal at the Games, and only the second Indian to win an individual Gold medal after shooter Abhinav Bindra in the history of Olympics.

So many awesome suggestions coming in for the Special Edition of the #NeerajGoldChopra @MahindraXUV700 ! We have some ideas cooking at the @MahindraRise Design studios! Will share more soon! @anandmahindra @rajesh664 @anishshah21 @vijaynakra

Mahindra Group Chairman Anand Mahindra praised Pratap Bose for the idea of a special edition XUV700. He reacted to Bose’s proposal saying, “Thank you guys, for moving as quickly on this as a javelin."

On Saturday, as soon as Neeraj Chopra secured Gold medal for India, Anand Mahindra announced that Mahindra will gift him with the XUV700 SUV, which will be launched in the coming few weeks. Calling Chopra the ‘Golden Athlete’, Mahindra had said, “It will be my personal privilege & honour to gift our Golden Athlete an XUV700."

Thank you guys, for moving as quickly on this as a javelin…😊 https://t.co/qI3RWotx9s

Mahindra XUV700, which is going to replace the XUV500 as the carmaker’s premium three-row SUV, is one of the most anticipated launches this year. Like its rivals Hyundai Alcazar and Tata Safari, expect the XUV700 to be packed with several features.

Mahindra XUV700 is likely to get a 2.0-litre mStallion petrol engine under the hood, that will be capable of producing 200 PS of maximum power output. A 2.2-litre mHawk diesel engine is also going to power the XUV700, which will be able to churn out 185 PS of maximum power.

Both engines are likely to be mated to a 6-speed torque converter automatic gearbox as well as a 6-speed manual gearbox. Mahindra may also add a 4X4 option for the XUV700 as well.