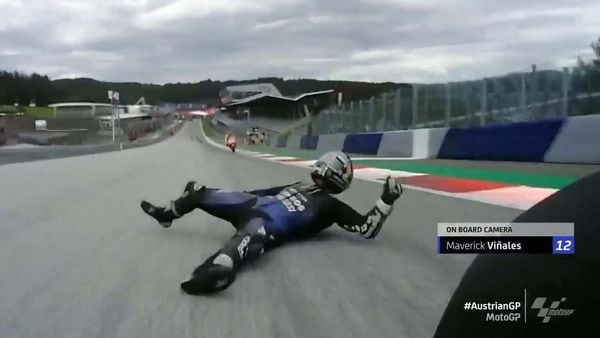 MotoGP racer Maverick Vinales captured skidding on the racing track after he jumped off his bike. (Photo courtesy: Twitter/@@MotoGP)

MotoGP racer Maverick Vinales was lucky to survive after he was forced to jump off his bike at a speed of 210 kmph after its brakes failed. The incident took place during the Syrian Grand Prix on Sunday.

The Spaniard later said that he was ‘luckily’ doing okay.

It all happened when Vinales was about take a turn during lap 17 of the race. He realised that the brakes on his Yamaha M1 has failed. Sensing an imminent high-speed crash, Vinales was left with little choice but to leap off his running bike. He skidded along the tarmac for a while before coming to a stop. However, the Yamaha M1 crashed into a wall and went up in flames moments later.

Maverick Vinales had to jump off his bike at 200 kilometres an hour, in a hectic MotoGP race in Austria. https://t.co/5zYfOfohG3 #7NEWS pic.twitter.com/0cH3io4CM5

"Today's crash was amazing. I never had that feeling before, where I completely lose the brakes and have to jump off," the 25-year-old racer was quoted by news agency AFP.

"I understand how it happened, the brakes overheated, but for sure it's not a common problem. Luckily, I'm okay. This is the most important thing. I will be 100% fit again (for the next race) in Misano."

This is the second time in a week that Vinales managed to dodge a major crash on the tracks. Last weekend, when Johann Zarco's Ducati collided with Franco Morbidelli's Yamaha at the Austrian MotoGP, Vinales had his first escape. When the two bikes collided at 300 kph, they turned into lethal projectiles for other racers. They narrowly missed Vinales’ bike as well as teammate Valentino Rossi.

"Fortunately, Maverick was able to jump off the bike in time, it was a very scary moment," Rossi was quoted by AFP. "In these last two weekends we were on the limit with the brakes."