The four Indian women cricketers that Hyundai Motor India has partnered are - Smriti Mandhana, Jemima Rodrigues, Taniya Bhatia and Shafali Verma.Hyundai is also partnering with BCCI as an associate sponsor for all international matches at the home grounds.
By : HT Auto Desk
| Updated on: 16 Dec 2021, 11:03 AM 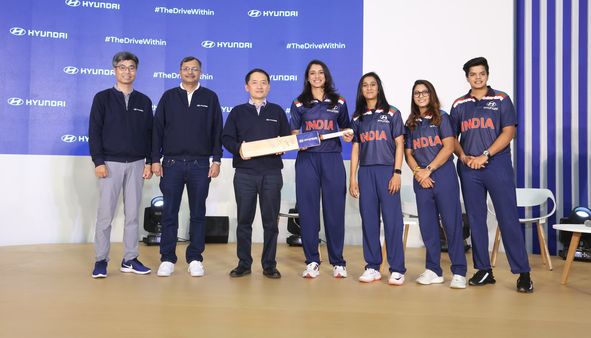 Hyundai Motor India has signed a Memorandum of Understanding (MoU) with the country's four women cricketers, entering a one-year exclusive partnership with them as brand ambassadors. The four sportswomen, Smriti Mandhana, Jemima Rodrigues, Taniya Bhatia and Shafali Verma, signed the MoU at the carmaker's headquarters in Gurugram.

Through this partnership, Hyundai hopes to highlight the women cricketers' contribution to the Indian cricket and celebrate women power in order tp inspire other athletes in India. “The grit & spirit shown by these sports women will become a role model for the entire nation. We are proud to announce them as Brand Ambassadors for taking the Hyundai spirit forward," said Seon Seob Kim, MD and CEO, Hyundai Motor India.

The carmaker also kicked off ‘The Drive Within’ campaign to evoke 'the drive within' among women athletes. Under this campaign, Hyundai will use the medium of digital films to highlight the winning stories of these women cricketers.

Of the four women cricketers who are now brand ambassadors of Hyundai Motor India, Smriti Mandhana is the vice-captain of Indian Women’s Cricket Team. Jemima Rodrigues is the world’s No. 12 T20 batter while Taniya Bhatia is one of the five best breakout stars in women's cricket ranked by ICC as well as World’s No. 2 T20 Batter. Shafali Verma is the youngest cricketer to play all three cricket formats.

Hyundai has had a long standing association with sports in India and the company is also partnering with the Board of Control for Cricket in India (BCCI) as an associate sponsor for all international matches at the home grounds.

Separately, Hyundai India is looking at playing the electric game with far more gusto and has confirmed plans of driving in as many as six BEV (Battery Electric Vehicles) in the country by 2028. This will likely include the Ioniq 5 EV.