Heavy showers cause traffic to crawl in several parts of Mumbai

Heavy and consistent morning showers have seen key roads in the city of Mumbai getting completely submerged.
By : HT Auto Desk
| Updated on: 16 Jul 2021, 11:15 AM 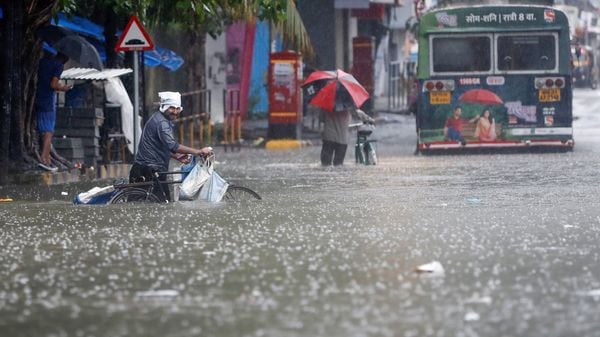 People wade through a waterlogged road after heavy rainfall in Mumbai.

Traffic in the morning hours of Friday was at a crawl in several parts of Mumbai after heavy showers lashed the city between 4am and 7 am. Many key roads here were water-logged which became a familiar yet unfortunate problem for locals on the move.

Locals took to Twitter to point out traffic nightmares and as per reports, there were jams reported from Dadar to Sion, at Mulund toll, on on WEH Goregaon, among others.

Mumbai suburbs received 70mm rainfall on Friday morning and officials from the Met department predict the showers to continue for most parts of the day.