Ahead of the meeting, Volkswagen and Daimler have urged the government to help boost demand for cars. The pandemic hammered first-quarter profits and forced both carmakers to drop their outlooks for the year.
By : Reuters
| Updated on: 05 May 2020, 08:41 AM 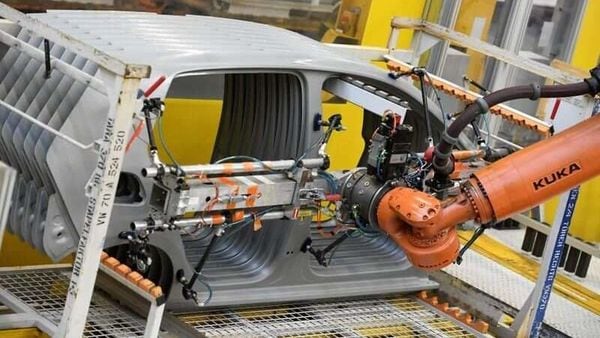 A robot moves car components in a production line at the Volkswagen plant in Wolfsburg, Germany March 1, 2019.

The business climate in Germany's auto sector suffered its biggest slump in April and hit its lowest level since 1991, when the Ifo economic institute began collecting data post-reunification, a survey showed on Monday.

The news came ahead of a conference call that Chancellor Angela Merkel will hold with senior representatives of the auto industry on Tuesday to discuss the impact of the coronavirus pandemic on production and sales.

The Ifo survey of 75 auto firms highlighted the sector's predicament.

The survey's current business index plunged to -85.4 points in April from -13.2 in March, falling below a reading of -82.9 points registered in April 2009, during the financial crisis.

"We have never seen such bad figures for this key sector," said Klaus Wohlrabe, head of forecasting at Ifo.

Sub indices on orders, production expectations and export prospects all fell, with capacity utilisation down to 45%.

Government spokesman Steffen Seibert said no decisions would be taken during Merkel's conference call with auto industry representatives on Tuesday.

Soeder said Bavaria, Baden-Wuerttemberg and Lower Saxony were working up a joint proposal on car buying incentives for discussion at Tuesday's meeting.

Soeder called for people who switch from modern combustion engine cars to electic cars within two years to also get an extra 1,000 euros. Those who set up electric car charging infrastructure should get support for 50% of the costs, he said.

Merkel and Finance Minister Olaf Scholz are working on a post-crisis stimulus package to support the economic recovery. Scholz said late on Sunday the government would present the package late May or early June.

The VDA car lobby group wants any cash incentives to also include vehicles with combustion engines. But Merkel said last week she wanted to combine the task of helping companies recover with the challenge of reducing carbon emissions.

Ahead of the meeting, Volkswagen and Daimler have urged the government to help boost demand for cars. The pandemic hammered first-quarter profits and forced both carmakers to drop their outlooks for the year.

Car sales across the world have slumped as measures to contain the pandemic forced production lines to shut and showrooms to close, starving manufacturers of much needed cash for investments.

Volkswagen restarted production at its Wolfsburg factory in Germany last week, the latest of a fleet of European carmakers to take advantage of eased lockdown rules to resume manufacturing.