From tyres to battery, from Seltos to Venue, South Delhi sees rise in car theft

SUVs like Seltos, Sonet, Creta and Venue are especially targeted in night-time robbery incidents.Cars parked on sidewalks are most vulnerable.Instances of CCTVs either not working or having a low resolution makes identifying culprits a difficult task.
By : Shubhodeep Chakravarty
| Updated on: 14 Dec 2020, 14:46 PM

SUVs like Seltos and Creta are offered with attractive alloy wheels, making them a compelling target for those with nefarious intent.

It was hardly the news that she was expecting to wake up to but when her frantic driver rang the door bell on Saturday morning, it was quite the proverbial wake-up call for 63-year-old Anita Haldar. She was informed that her family's Seltos was missing all of its four tyres and was precariously balanced on stones used as stilts.

Another day. Another car. And another SUV to fall prey to miscreants who have become increasingly active in several localities in South Delhi.

Haldar, a resident of I-Block in CR Park, says she had heard of such incidents where cars were found with their tyres stolen. But she had hardly ever expected it to happen to her own 14-month car. "Look at my car. It is parked under this bright LED streetlight right in front of my house," she told HT Auto, pointing to the Kia car in a bright shade of orange. "In fact, my driver initially thought there was a flat because of the way the car was tilted. It was when he saw that the tyres were missing that he quickly rang the door bell to inform us."

The 63-year-old social worker called the police who came to investigate the matter. Her 68-year-old husband, however, explains that he had to personally go to the police station to get them to lodge an FIR. "He was told at the station that some of the barricades around our area had been moved to Mehruali on Friday night. There is a CCTV in our area but it wasn't working," said Haldar, hinting at the possibility of it being a well-planned robbery. 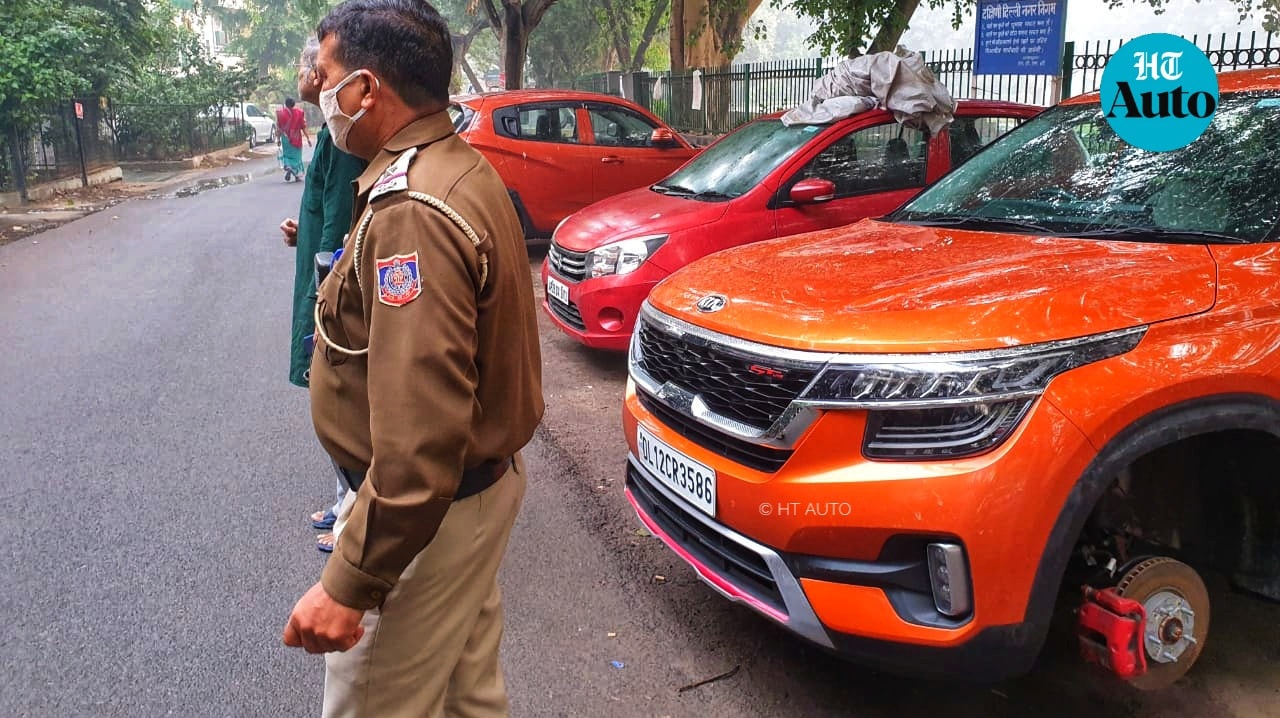 Such incidents do require careful planning but the rising number of such incidents also indicate the level of precision reached by those targeting big vehicles. A Kia Sonet with its wheels missing stands in CR Park's G Block.

The adjoining area of Kalkaji is hardly safe with numerous cases of tyre-jacking being reported from here as well. And it is usually SUVs like Seltos from Kia or the Creta and Venue from Hyundai that fall prey, possibly because of the attractively-designed alloys that is likely to fetch a good price in the seconds market. Little wonder then that in just the past few weeks, wheels of a new white Sonet, a blue Venue and a white Seltos have gone missing. 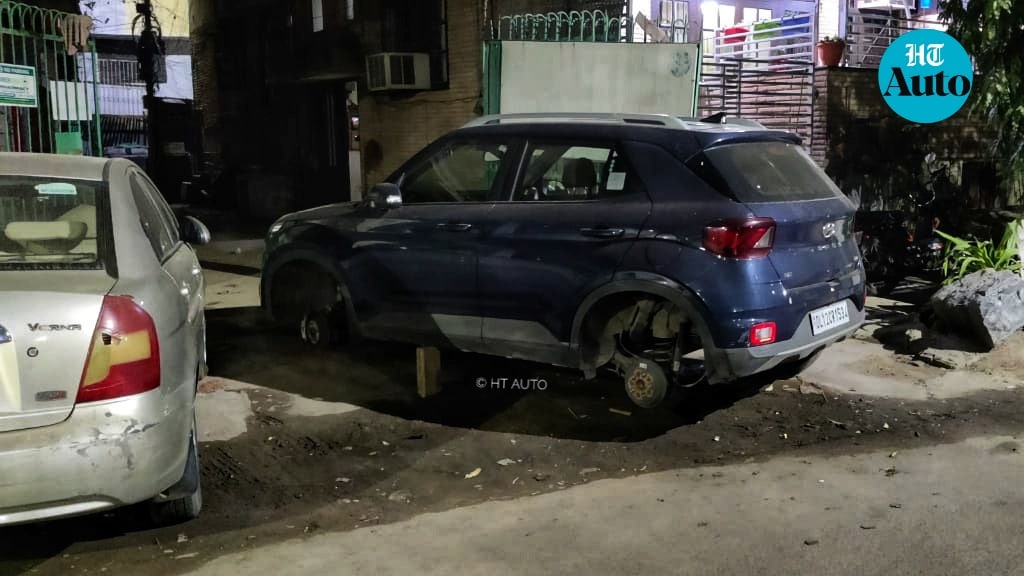 A Hyundai Venue stands precariously on a brick with its two wheels missing.

It is suspected that at least two to three people strike in the night hours, working quickly to remove the wheels of a chosen vehicle before making off. And while many localities in South Delhi are barricaded at night, it has hardly served as a deterrent. Those in the know suspect that there is a demand for alloys of newer cars and these fetch a good price. And with more and more cars parked out on the streets, these become relatively easy pickings.

Another rising concern is the spate of battery thefts from smaller cars parked on the streets. Such incidents do not even need the disguise of the night to provide cover. "My Alto was parked just outside my friends's apartment in Kailash Colony. When I came after spending a day there, it won't start. Eventually, we opened the bonnet to discover the battery had been whisked away completely," said Vineeta Singh, a 52-year-old government employee. "It is possible that the person responsible pretended it was his car and managed to open the bonnet to pretend he was inspecting it. Onlookers may have thought it is his car."

The increasing number of vehicles parked on streets - with garage space limited - is one of the main reasons for the correspondingly rising cases of parts being stolen. And with the quality of CCTVs often not being up to the mark and masks being worn on faces, it is often difficult to identify the accused.

And yet, to make quick work of removing four wheels, putting the car on stone stilts and escaping with the 'loot' through barricaded routes has a rather brazen demeanor about it. "I don't expect the accused will be caught. Other incidents in the past have not been solved," said Haldar. "I have claimed insurance but the point is we need to fight such incidents."

For now though, the best solution may just be to park vehicles inside residential compounds, space permitting, because even CCTVs and well-lit areas are hardly any deterrents at all.