The surprise shake-up adds to the alarm over how poorly Ford has been performing.Ford announced the moves days after projecting 2020 profit that was well below Wall Street’s expectations, sending its shares plunging the most in nine years.
By : Reuters
| Updated on: 09 Feb 2020, 10:23 AM 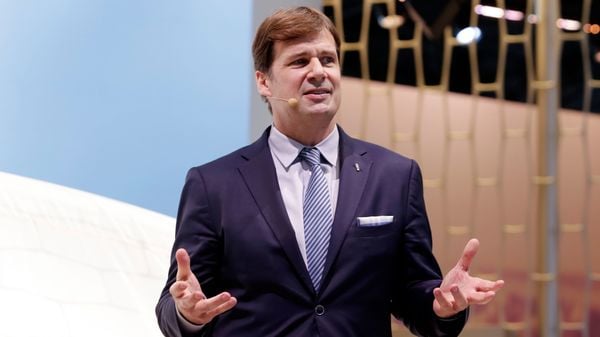 FILE - In this March 28, 2018 file photo, Jim Farley, Jr. executive vice president and president of Global Markets of the Ford Motor Company, is shown in this photo during New York International Auto Show. Ford is shaking up its management after a poor fourth-quarter financial performance and the botched launch of the Explorer SUV. (AP Photo/Richard Drew, File)

Ford Motor Co on Friday shook up its top management, naming strategy chief Jim Farley as chief operating officer of the No. 2 U.S. automaker and promising skeptical investors the company will kick a slow-moving turnaround into a higher gear.

Ford's move positions Farley, 57, as potential heir to Chief Executive Jim Hackett, who took over in May 2017. Farley is currently president of new businesses, technology and strategy but will now be responsible for all global operations as well as future technology such as self-driving cars.

News of Farley's promotion and the retirement of automotive president Joe Hinrichs, another potential CEO candidate, effective on March 1, came three days after Dearborn, Michigan-based Ford saw its shares slide following a disappointing forecast. On Friday, Ford shares were off as much as 2.8% to their lowest price since January 2019 and finished the day down about 1.7 percent.

Farley told Reuters that Ford needs to move more quickly, especially around taking advantage of the software, data and connectivity in its vehicles including commercial vehicles. Farley added that Ford was "deep" in partnership talks with digital companies to improve its customer experience.

"We put a lot of new cost and capability in these new vehicles," Farley said in a telephone interview. "We have to get a lot quicker in taking advantage of them. We do not have two or three years to figure out how we use connectivity in the F-150 and our new electric architecture that we launch later this year."

Ford is in the midst of a global restructuring and faces slumping demand in China, its second-largest market. Hackett said on a conference call with reporters that the company needs to move with greater speed, echoing what some investors have said.

"It's my judgment the time is to move with urgency now to fully integrate and accelerate Ford's transformation," Hackett said.

"We're now in execution mode and what the company needs is to come together," Hackett added, saying he had no plans to leave the company after almost three years on the job and it was the board's role to manage succession.

Analysts and investors have speculated how long Hackett, 64, will remain as CEO and whether an internal executive or an outsider will succeed him. Ford's struggles, including a poor launch of its new Ford Explorer SUV and rising warranty costs, have only heightened speculation.

Ford restructuring is far from complete. It said on Tuesday it has booked $3.7 billion of the projected $11 billion in charges it previously said it would take, and expects to book another $900 million to $1.4 billion this year.

In China, Ford lost $771 million last year, about half the 2018 loss, and its market share there has shrunk. Ford has been struggling to revive sales there since its business began slumping in late 2017, and now the world's largest market has been hit by a fast-spreading coronavirus that has killed more than 630 people.

Another key element for 2020 is Ford's planned introduction of a fully redesigned F-150 full-sized pickup truck, its top profit generator, as well as the Mustang Mach-E electric SUV and the Ford Bronco utility vehicle.

Farley joined Ford in 2007 as global head of marketing and sales and went on to lead Lincoln, South America, Ford of Europe and all of Ford's global markets in successive roles. He previously worked at Toyota Motor Corp.

Farley is credited, along with Hackett, in forcing the redesign before its introduction of the Mach-E and the decision to make it a Mustang vehicle, leveraging that iconic brand. Farley has owned seven of the cars starting with a 1965 model he restored when he was 14 years old.