Honda and Nissan are scheduled to report third-quarter results on Tuesday, and Toyota on Wednesday.
By : Reuters
| Updated on: 08 Feb 2021, 11:34 AM 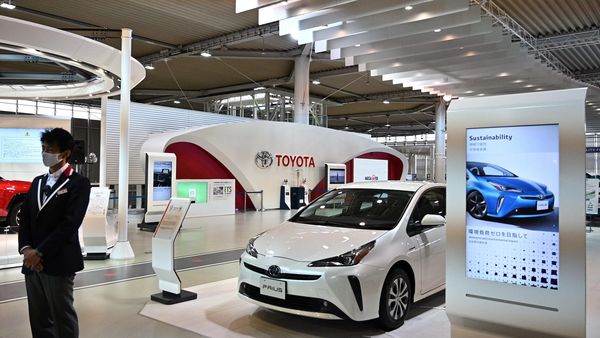 (FILES) In this file photo taken on November 6, 2020, a staff member stands in a Toyota showroom in Tokyo. - Japan's Toyota reclaimed the title of world's top-selling automaker in 2020, according to data released by the firm on January 28, 2021, pushing Volkswagen into second place for the first time in five years. (Photo by Philip FONG / AFP)

Japanese automakers Toyota, Nissan and Honda report third quarter results this week buoyed by recovering demand in China and the United States, but a global chip shortage has clouded their earnings outlook.

A surge in demand for electronics as more people stay home due to the coronavirus pandemic has led to shortages of semi-conductors, forcing the carmakers to cut production just at a time when sales have recovered more quickly than expected.

Compatriots Subaru Corp and Mazda Motor Corp have cut production as well, as have other automakers including Volkswagen AG.

"Chip shortage seems to have a larger impact on Japanese and Europeans as the shortage is mainly caused by NXP Semiconductors and Infineon," said James Hong, an analyst at Macquarie Capital, adding that Korean rivals have a larger number of local suppliers and a healthier chip stockpile.

Chipmakers who supply auto companies outsource most of their production to contract manufacturers like Taiwan's TSMC, which analysts say, often prioritise orders from electronics clients who account for nearly all their revenue.

The supply shortages were exacerbated by the previous US administration's actions to curtail technology transfers to China, which hit Chinese chip factories, as well as by a fire at a chip plant in Japan and coronavirus lockdowns in Southeast Asia.

Analysts polled by Refinitiv expect Toyota, the world's largest automaker by vehicle sales, to forecast a profit of 1.5 trillion yen ($14.22 billion) for the year ending March 31. That compares with a 1.3 trillion yen profit Toyota forecast in November.

Toyota said last month it will cut production of its Tundra full-size pickup truck at its San Antonio, Texas, plant.

Honda will likely forecast a profit of 463.6 billion yen, Refinitiv data shows, compared with its forecast of 420 billion yen. Sources told Reuters that Honda will lower its domestic production this month of models such as the Fit subcompact and the N-series mini-vehicle.

Nissan is likely to forecast a 230.09 billion yen operating loss for the full year, according to Refinitiv, down from a loss forecast of 340 billion yen.

It is unclear how long the chip shortage will last.

Macquarie Capital expects auto production to be affected until mid 2021, as chipmakers ramp production, while data firm IHS Markit said the shortage could last until the third-quarter of this year.