Fiat and Peugeot said they “will continue to cooperate” with the regulators to answer their questions, according to an emailed statement.
By :
| Updated on: 17 Jun 2020, 08:54 PM 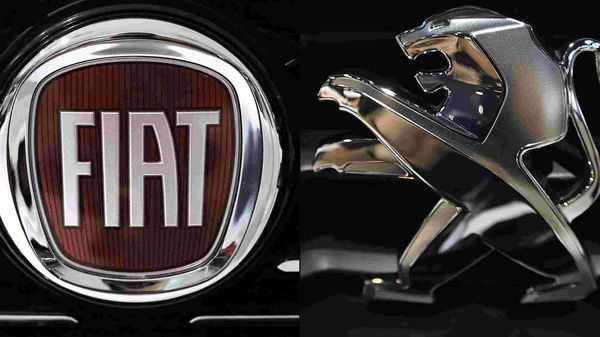 This combination of file pictures created on October 31, 2019 shows the logo of Italian auto maker Fiat (L) in a cars dealer on January 12, 2017 in Saluzzo, near Turin, and the Peugeot logo pictured at the 2014 Paris Auto Show on October 3, 2014 in Paris.

Fiat Chrysler Automobiles NV and PSA Group face a lengthy European Union investigation into their deal to create the world’s fourth-biggest carmaker after regulators said the tie-up could reduce choice for small vans.

The European Commission set a Oct. 22 deadline to examine concerns that the transaction would remove one of the main producers of light commercial vehicles in several European countries, it said Wednesday in an emailed statement.

Commercial vans “are a growing market and increasingly important in a digital economy where private consumers rely more than ever on delivery services," EU Competition Commissioner Margrethe Vestager said in the statement. “We will carefully assess whether the proposed transaction would negatively affect competition."

The EU frequently demands the sale of overlapping businesses to prevent a merged entity from becoming too powerful and has been unafraid of wielding its ultimate threat to veto deals, such as Siemens AG and Alstom SA’s plan to create a European rail behemoth.

Fiat and Peugeot said they “will continue to cooperate" with the regulators to answer their questions, according to an emailed statement.

“Preparations for the merger are advancing as planned," the companies said. “Groupe PSA and FCA reaffirm the shared objective to close the transaction by the end of the first quarter of 2021."

The two automakers would hold high market shares in France, Germany, Poland, Spain, the U.K. and several other countries, regulators said. They “appear particularly strong in the smaller vans segment" where there are fewer competitors and any new rival seems unlikely. The two producers often compete head-to-head for vans with similar prices and the deal would remove an important rival for both.

While longer investigations raise the potential risk of blocking a deal, they can also be beneficial by allowing companies to argue for fewer concessions, or to hammer out more complicated divestments or changes to licensing or distribution.

The companies agreed in December to merge and have so far kept the deal afloat through the course of the coronavirus pandemic’s immense disruption to auto production and sales around the globe.

In the case of the Fiat-PSA deal, it’s unclear how the EU will take into account plummeting auto demand in the region due to the outbreak. Regulators often try to forecast the companies’ future sales as they try to see how a deal might harm rivals, suppliers and customers.