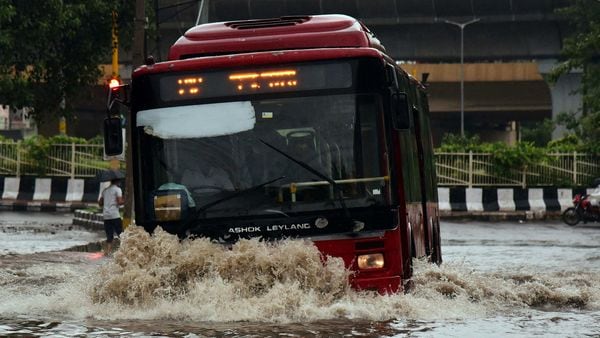 File photo: A DTC bus makes its way through a flooded street in Delhi.

The sight of a Delhi Transport Corporation (DTC) bus parked by the side of city road is quite common for locals here but what may have made the sight this common is that every single bus in operation is reportedly above its ideal age of operation. Hindustan Times has accessed data from Jawaharlal Nehru National Urban Renewal Mission (JNNURM) which specifies that the maximum operational life of a low-floor CNG bus is 12 years or 750,000km, whichever is later. But such buses with DTC are running beyond the said timeline.

This comes at a time when Delhi has a clear shortage of buses meant for public transportation. As per a government affidavit submitted to the high court, Delhi requires 11,000 buses to cater to the needs of locals here. At present and including around 3,000 cluster buses operated by private players, the figure is only around 6,700.

The same report mentions that Delhi transport minister Kailash Gahlot, who is also the chairperson of DTC, has raised the issue in a recent board meeting of the corporation. "“Yes, it is true, and chief minister Arvind Kejriwal has also expressed concern as our state-run buses are the lifeline of Delhi’s public transport," he was quoted as saying. "Our DTC and cluster buses together carry at least one million passengers more than the Delhi Metro every day. So, we planned a revival of the DTC by pumping in 1,300 new buses in the next seven months."

A tender for 1,000 AC buses was finalized last year and two bidders received the contract. Allegations of irregularities, among other hurdles, continue to cast a shadow on the future of public buses in the capital city.