Days after arrest, Indian-origin man caught in backseat of another Tesla

Param Sharma bought another Tesla to repeat his stunt, sitting in the backseat while the car moved on Autopilot.
By : HT Auto Desk
| Updated on: 15 May 2021, 12:09 PM 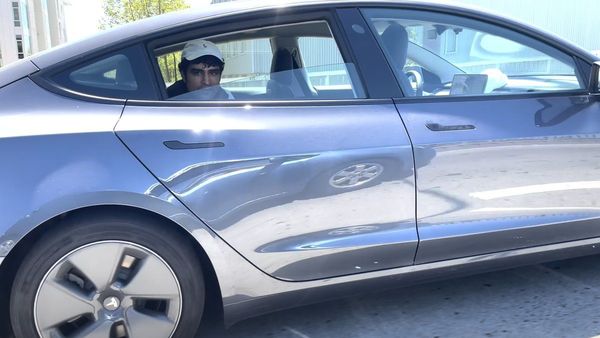 Param Sharma got released from jail this week, bought a new Tesla and repeated the same Autopilot trick.

An Indian-origin man in United States, who was recently arrested for 'alleged reckless driving' by sitting in the backseat of a Tesla car running on Autopilot, has once again repeated his trick.

Soon after he was released, 25-year-old Param Sharma bought a new Tesla car and committed the same offence, this time in a brand new Model 3 car. He took the same route he did previously as he vowed to continue doing this trick despite his recent arrest.

UPDATE 1/2: Param Sharma tells @JesseKTVU he already got a bright-red brand-new @Tesla Model 3 after @CHPoakland towed his other one because of his backseat driving pic.twitter.com/H5Ning2leP

Earlier this week, he was caught inside another Tesla Model 3, which appeared to be in a self-driving mode without any person behind the wheel.

When spoken to, Param Sharma did not appeared regretting his actions at all. In fact, he claims that backseat driving is not as dangerous as it is made out to be in the first place. He was quoted saying, "‘I feel safer back here (in the back seat) than I do up there (in the driver’s seat)," by a local news agency.

The person had earlier claimed that he has already done more than 40,000 kms doing the same tricks on Tesla cars. "It was actually designed to be ridden in the back seat. I feel safer in the back seat than I do in the driver’s seat, and I feel safer with my car on Autopilot, I trust my car Autopilot more than I trust everyone on the road," Sharma had said after his arrest.

Param Sharma now faces jail once again with his latest act. He was charged with reckless driving and disobeying a police officer for his earlier act. However, he was let off with a stern warning that if he repeats his mistake he will be send behind bars again. "You are not to drive unless you’re in the driver’s seat of your vehicle. And if you do, we’re gonna put you back in jail," the court said.

The recent incident is also being investigated by the California Highway Patrol, which is also probing the May 5 fatal crash of another Tesla car, reportedly being run on Autopilot mode.