The auto industry accounts for more than 80% of demand for the precious metal. That makes it difficult for the market to ignore the shutdowns in China.
By : Bloomberg
| Updated on: 14 Feb 2020, 09:14 AM 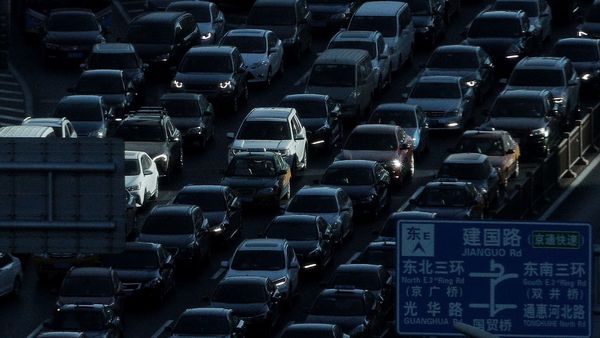 FILE - In this Dec. 11, 2018, file photo, a beam of sunlight is cast on vehicles on a city ring-road clogged with heavy traffic during the morning rush hour in Beijing, China. Auto sales in China have plunged, deepening a painful downturn in the industry’s biggest global market and adding to economic pressure as the country fights a virus outbreak. (AP Photo/Andy Wong, File)

A record 22% slump in China’s January car sales is threatening to derail the rally in palladium, used to curb emissions from vehicles.

The precious metal generated a 59% return for investors last year, the most of any commodity tracked by a DCI BNP Paribas gauge. The rally was fueled by expectations that stricter Chinese environmental standards will spur higher loadings of the material in cars. The bullish sentiment is wavering, with hedge funds paring their bets on higher prices to an eight-month low.

On Thursday, the China Passenger Car Association predicted a worsening outlook for the industry, saying sales may drop more than 30% in February. The virus that spurred factory shutdowns in the Asian nation has also disrupted the global supply chain, prompting South Korea’s Hyundai Motor Co. and Japan’s Nissan Motor Co. to halt some operations in their home countries due to shortages in auto parts.

“Suspended operations could create a short-term bottleneck and a temporary dip in demand" for palladium, Suki Cooper, precious metals analyst at Standard Chartered Bank, said in an emailed message. “The key question will be how deeply auto sales are impacted thereafter."

Palladium for immediate delivery has fallen 5.6% to $2,433.50 an ounce on Thursday from a record in late January.

Citigroup Inc. sees prices falling $2,100 an ounce in the near term under base case scenario where the market remains tight. A more drastic scenario where a worse battle with the disease drags on could see the metal slide to as low as $1,600, the bank’s analysts said.

On Thursday, the Chinese province at the center of the outbreak reported a 45% surge in coronavirus cases to nearly 50,000, after authorities added a new group of patients diagnosed by a different method. That raised questions over the true scale of a crisis that appeared in recent days to be coming under control.

Output in the world’s largest auto market could be cut by more than 1.7 million cars should the spreading virus resulted in more shutdowns of manufacturing facilities across China, lasting into mid-March, according to an IHS Markit estimate last month.

The auto industry accounts for more than 80% of demand for the precious metal, according to a Johnson Matthey report released Wednesday. That makes it difficult for the market to ignore the shutdowns in China.

“The effects on the wider, global supply-chain are also starting to show," refiner Heraeus Holding GmbH said in a research note. “Plants across Europe and the wider Asia region are also at risk now because of problems sourcing Chinese-made parts."

While that demand is expected to return with eventual manufacturing plant reopenings, a delay in enforcement of the standards isn’t off the table in more extreme scenarios if automakers are unable to return to normal operations by July, according to DWS Group.

Still Heraeus said demand will likely “rebound as plants try to make up for lost time and consumers make car purchases that they were forced to delay."