Home Auto News Cars On Sale: How Americans Are Hunting For Great Deals On Dream Wheels

Cars on sale: How Americans are hunting for great deals on dream wheels

Tips and tricks for buying a new car at great deals are galore in the US. Some of these are also applicable to other markets.
By : Bloomberg
| Updated on: 24 Jul 2020, 03:51 PM 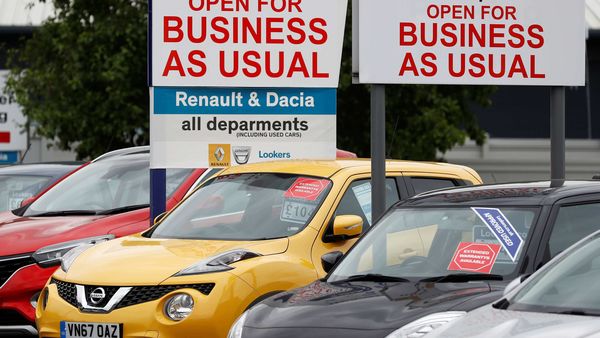 This is going to be the summer you get a great deal on a car. It just might be a wild ride to get you from the proverbial couch to signing on the dotted line.

KPMG International analysts predict a 10% permanent reduction of the nearly 3 trillion road miles typically traveled every year in the US Vehicle ownership this year will decline as well, to fewer than two cars per household, KPMG says, down from just over two in 2019.

What’s more, according to the National Automobile Dealers Association, US auto sales will plunge to as low as 13 million this year, thanks to the economic volatility and uncertainty caused by the Covid-19 pandemic. That’s compared to 17 million vehicles sold nationwide annually for the past five years. So you could say automakers are feeling some anxiety about selling their wares.

“Manufactures have panicked a bit," says Lisa Copeland, a longtime Fiat dealership principal and author of the book Car Buying, Her Way. Stalling numbers such as these can translate into devastating losses. “Nobody knows what tomorrow means."

But some factors are working directly in automakers’ favor when it comes to selling cars: Airlines are reporting minuscule flight capacities and reduced travel routes, and international borders remain mostly closed to travelers from the US In large cities such as New York, consumers who were once satisfied to thrive without owning a vehicle are now buying them to help aid weekend escapes from shut-down neighborhoods, or just to avoid the subway and bus on the way to work. Meanwhile, as city dwellers flock to the suburbs, the increasing number of those needing cars is sure to register at dealerships everywhere.

“In Texas, where I live, they have had record-breaking months," Copeland says. “In May of 2019 to May of 2020, in terms of sales: record-breaking. It has been a trifecta of nobody knows how this is going to end, so everybody got very aggressive [with pricing]. The benefits got passed along to the consumers."

What’s a worker with wanderlust and a week off from work(ing at home) to do? If you’re like the millions other Americans dealing with the effects of Covid-19, you may not be driving to work every day, but you’ll still hit the road.

“We have a good level of confidence that our customer understands the situation," echoes Giovanni Perosino, Lamborghini’s chief commercial officer. “Maybe you travel less, maybe you have more free time, so why not? Maybe you get a Lamborghini for your free time."

To that end, here is the best advice from longtime industry experts on how to get a great deal on a car. It’s the kind of peace of mind that counts for a lot out on the open road, even if you’re just out for the thrill of it.

Do your homework. No quick buys.

Yes, we know this is basic advice—the most basic. We also know that even the wealthiest, most enthusiastic car collectors and drivers in the world (the ones who spend hundreds of thousands of dollars on cars a year) still make the mistake of buying things on a whim. Such impetuous thinking opens the door to making a decision based on emotions, either toward the car or toward the friendly salesperson, rather than facts.

“The first thing I tell consumers to do is never, ever walk in to the dealership cold—big mistake," says Copeland. “I don’t care if you’re buying a house or a car or a ballgown, it doesn’t matter—high emotion equals low intelligence."

Spend time researching residual values, reliability, maintenance scores, and prices. It’s especially important to find out the average price people in your area paid for the specific model you want, since the availability and popularity of any given model (the two things that determine pricing) can vary widely by region.

The virtues of all the usual websites apply: Check Kelley Blue Book, Cars.com, Edmunds, Autotrader.com, and even Bringatrailer.com and Hagerty.com (worth the subscription, especially for older models) to read reviews and critiques of the vehicle you’re considering and to get a feel for the relative values, based on model year and mileage. KBB updates its deals and recommended models weekly, so it’s worth checking back often.

Do the deal online.

You’re more likely to keep rational, data-driven thought, rather than emotions, at front of mind if you don’t go into a dealership. At least, get the first quote online—the one that maximizes profit for dealers—and work from there when you head in for a test drive.

“When you work online, you’re going back and forth with somebody who is trained in online sales," Copeland says. “You can, at the same time, be looking at AutoTrader or Kelley Blue Book to compare values, and you can get the valuation on your trade-in from the comfort of your living room."

“Shop a few dealers, feel out who will give you the most on your used car—all that stuff you can do long before you step onto the showroom floor," says Matt Delorenzo, senior managing editor for Kelley Blue Book. “There are even new tools if you feel confident and you know the vehicle you want; you could virtually buy a car from your home now. They’ll bring the car to your house. You sign the papers and take delivery at your home."

You can have the hot new thing or a great deal—pick one or the other. 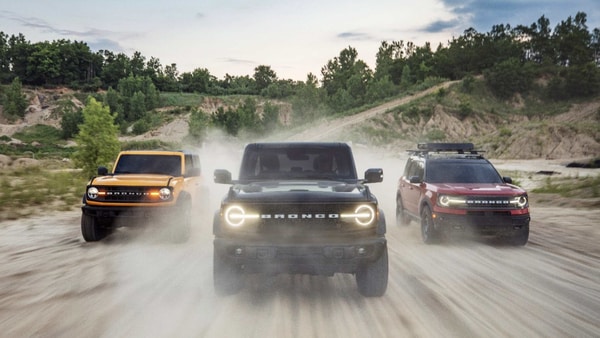 Ford Bronco may be the biggest talking point on US roads currently but a deal is unlikely currently.

“You’re not going to get a deal on the new Bronco—it’ll be MSRP at best," says Delorenzo. “Dealers are independent business[people]; they can charge whatever they want. Certainly, some won’t be shy asking for more than sticker. And nobody is going to be getting a below-MSRP price."

Eventually, the Bronco will be a relatively high-volume vehicle. More than 200,000 units of direct competitor Jeep Wrangler are built annually, so once the Bronco sees such production levels, a more traditional market with balanced supply and demand—where you have half a chance of getting a deal—will evolve for the Bronco.

“At that point, there will be some incentives and lease deals on it," he says. “It just depends on how ambitious Ford is on ramping up production, and how quickly that will happen." This is likely to take a couple of years.

Go deeper than the obvious.

Often, the lesser known variant of a car you want might be available, rather than the main version that’s getting all the hype. For the new Bronco, that may mean that some versions, such as the Sasquatch trim level, become available quicker than others. By contrast, the Ford F-150 Raptor or Jeep Wrangler Rubicon may be more difficult to get than their relatively standard, base-model equivalents.

“Production is ramping up, and that’s where you see the opportunities. The manufacturer will tell you which variants aren’t selling by the availability of rebates and incentives on any particular model," Delorenzo says. It pays to know which variants and trim levels of a vehicle are going to be more popular in your area; then choose something else.

Consider an “off" brand.

“You’ll see that in SUVs in particular, some otherwise well-known or particular manufacturers in highly competitive segments aren’t dominant in that segment," Delorenzo says. “Look there for deals." Subaru, for example, is dominant in its wagon/all-road class. So you will probably have a better chance at getting a deal on a comparatively priced vehicle by another brand such as Acura or Audi.

Know which fees to pay (or not).

State and local sales tax, a documentation fee (aka “doc fees"), and motor vehicle registration fees are the only fees that dealerships are legally owed. Everything else is negotiable.

Such things as “Dealer Prep" (aka “D&H") and “Market Adjustment" fees are added at the discretion of the dealer and are therefore worth fighting over to knock down your purchase price.

Insurance packages that cover things such as tires and wheels on expensive cars—which often have low-profile wheels and carbon-fiber components that can crack or shatter easily—can be life-savers. Just be sure to work for a good price. It never hurts to ask.

“As a former car dealer, I always buy the extended warranty, but you should know that price is negotiable," Copeland says. “You could always get a couple hundred dollars off if you ask."

If you can, time your visit to a dealership wisely. For instance, if you go to look at cars on a weekday morning or early in the afternoon, you’ll get more personalized attention from salespeople—and probably a longer test drive—than if you go during busy weekend or after-work hours. What’s more, going to the dealership over the Black Friday weekend or during the week following Christmas can work to your advantage. Dealers will want to clear out inventories and hit their sales goals for the month and year, so they’ll be motivated to make a deal.

Buy the end of the model year. 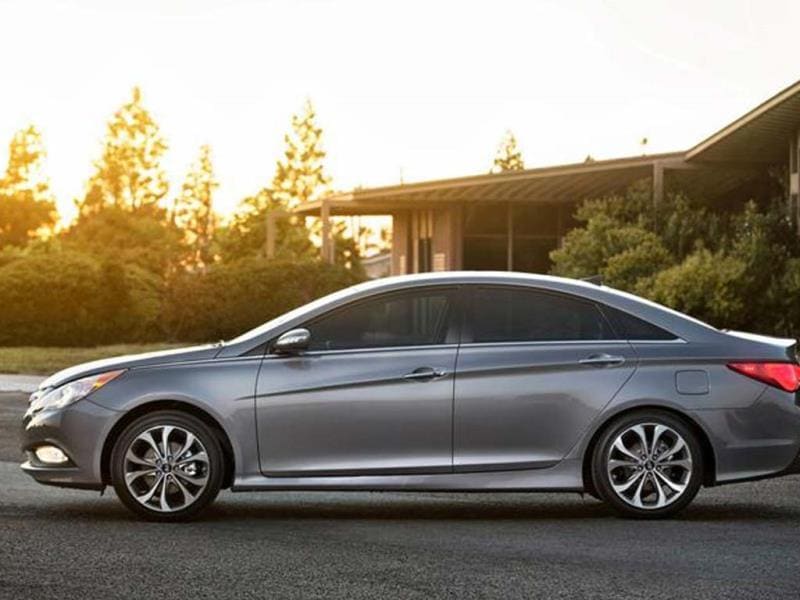 Hyundai is all set to launch 2021 Sonata in the US. This may mean the 2020 Sonata can benefit from some great deals.

The model years attached to new cars are often relatively meaningless, since the differences between a 2018 and a 2019 Volvo sedan, say, are imperceptible. Determine the end of the current generation of the model you want to buy, and buy that year. Here’s why: A dealership with two years’ supply of a new car on its lot will want to get rid of the older ones to make room for new models being delivered, whether they represent a totally new generation or just the new-for-2020 models. The older models will be priced to move.

Get pre-approved. But don’t get stuck on that number.

This one is simple. When you have pre-approved financing, the dealer has a benchmark to meet or beat—give one the opportunity to do so, and you might find yourself with a better offer, says Brinley.

Push for the extras, especially during the Covid-19 pandemic.

Before settling on a final price, get the dealer to sweeten the deal with such incentives as extended warranties, insurance packages, a car cover, free tire rotation, free oil changes, extra tires, and/or other various services. Maybe for your new Corvette C8, you negotiate free competition sport bucket seats or interior carbon-fiber trim (regular price $500 and $1,500, respectively).

Or, amid the pandemic on, get them to deliver the new car—completely disinfected—to your home, free of charge. With an uncertain future, it’s all on the table.

“Nobody knows how this is going to end, so everybody—both the manufactures and the dealers—has gotten very aggressive with things like incentives and financing offers and extras," says Copeland.

The bottom line: Choose a car that makes you excited every time you slip behind the steering wheel, and you’ll always feel you got the best deal of all.