The Miami Beach locals spotted the Dodge Challenger swallowed by flames after hearing an explosion late in the night.
By : HT Auto Desk
| Updated on: 25 Mar 2021, 02:39 PM 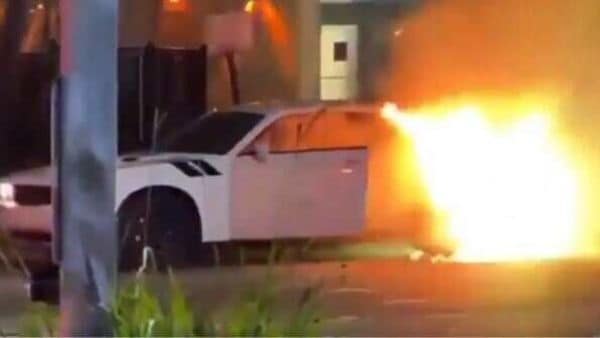 A recent video has captured a white Dodge Challenger caught in flames on a street in Miami, Florida while a group of onlookers on the other side of the street watch the muscle car burning. The incident took place as huge crowds of spring break revelers come to the popular South Florida destination, making it out-of-control for the local authorities to handle the rush.

The video has been posted on Twitter by many people and in one such video, an onlooker exclaims that the vehicle might explode any moment and kill them all. The video shows the Challenger's rear portion completely engulfed in fire while the front seems to be intact, thus, making the vehicle recognizable.

A Miami Beach resident who posted the video on Twitter mentioned that the locals heard an explosion late in the night and came out to spot this Dodge Challenger swallowed by flames. The locality also faced power outage for about nine hours. The Miami Beach Fire department was summoned to put out the fire after which the car was removed from the street. After removal of the car, there could be seen some ash along with a broken manhole cover.

Miami Beach residents heard “major explosion” around 10PM last night near Collins Ave. and 60th St., spotted this car, and the power went out for about 9 hours. @MiamiBeachFire put out a fire at a nearby @insideFPL substation which may have caused the car fire. #BecauseMiami pic.twitter.com/60R0AmDhJ1

The Miami Beach area has also reported other such incidents of vehicles being trashed by the crowds of spring breaker revelers who have also damaged buildings and other property, got involved in fights, etc. The authorities are speculating that the revelers are not simply typical college students who come to the place for fun. The situation in Miami Beach has been completely out of control.

However, the exact reason for fire on the Dodge Challenger is not yet known. The manhole cover below the Challenger could also be a possible reason for the fire as exploding utility hole covers are a thing that do exist.