Some Berlin motorists have reacted with anger to the new yellow bike symbols being spray-painted on lanes normally used to park cars.
By : AP
| Updated on: 23 Apr 2020, 08:51 AM 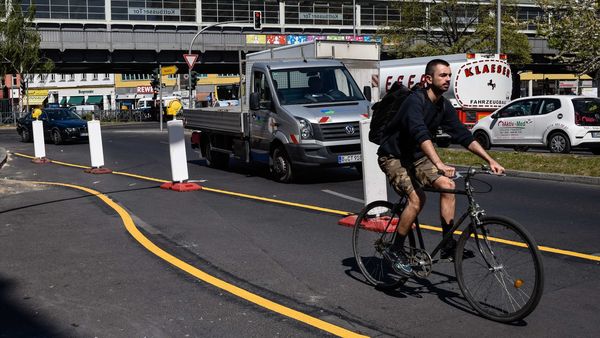 Authorities in Berlin are setting up temporary bicycle lanes to meet demand for safe cycling on the German capital's streets during the coronavirus pandemic, angering some motorists.

The move is intended to help people get about the city without having to use public transport, where social distancing can be difficult.

Felix Weisbrich, who oversees street planning in Berlin's district of Friedrichshain-Kreuzberg, said miles of new ‘pop-up' bike lanes now being set aside for cyclists would have been implemented in the long term anyway.

“We are bringing them forward against the backdrop of the pandemic and the need to maintain distancing," he told public broadcaster rbb Wednesday.

But cycling advocates say the outbreak appears to have encouraged the city's administration to slice through reams of bureaucratic red tape that would normally have delayed the process by years.

Some Berlin motorists have reacted with anger to the new yellow bike symbols being spray-painted on lanes normally used to park cars, though alternative, paid parking facilities are usually being offered nearby.

“There's no right to free parking on the streets," said Weisbrich.

(Also read: Why this city is promoting cycles to beat coronavirus)

Berlin is following in the tracks of cities such as Bogota, Budapest and Vancouver, which have also set aside more road space for cyclists during the outbreak.

Anxiety about getting to close to strangers has contributed to a drop in public transport use, with many commuters dusting off their old bikes to get to work instead. Doctors also note the health benefits of outdoor physical exercise in boosting people’s immune systems.