Bentley is going to introduce a new model which might be the long-wheelbase version of the existing Bentayga SUV.
By : HT Auto Desk
| Updated on: 30 Apr 2022, 11:13 AM 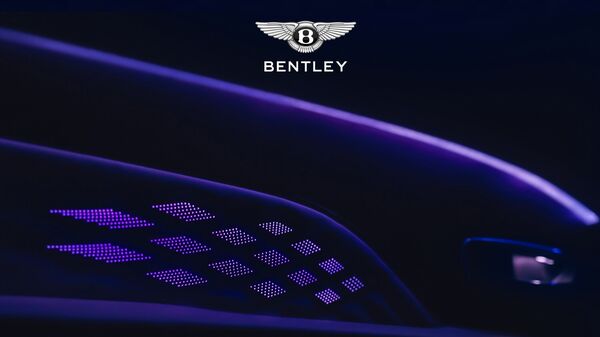 The new model by Bentley.

Bentley has teased a new model that is all set to make its debut on May 10. Bentley has hardly shared any information related to the upcoming model, but it is being guessed that this new car might be the long-wheelbase version of the Bentley Bentayga. The teaser video shows the inside of a door that reflects purple-coloured ambient light with rhombus-shaped designs which are illuminated. Reports speculate that this can also be an entirely new model that Bentley is going to add to the range.

Bentley mentioned that ‘designers, engineers and craftspeople have gone to new lengths to combine luxury, technology and performance’ to develop this new model. The ultra-premium automaker further added ‘With an extra dimension of on-board wellness, the new model will sit in sumptuous comfort at the pinnacle of its range and deliver a breadth of capabilities beyond anything previously offered.’ This will be a wait and watch game to know what new the premium automaker has to offer.

Bentley is also consistently focusing on its Beyond100 strategy to become a carbon-neutral brand by 2030. This move is backed by 10-year investment plans at the Bentley's Crewe factory. This investment is worth 3 million euros. Bentley also has plans to develop one new electric model each year for five years from 2025 onwards, as the brand's entire model range will undergo electrification.

In terms of sales, Bentley fared quite well last year as it earned profits worth 389 million euros compared to the 369 euros million in 2020. The brand's turnover touched 2.845 billion euros. Bentley delivered about 14, 659 vehicles last year.