Bengaluru Traffic Police will use Google AI to optimise signals at crucial junctions to efficiently manage traffic in the Silicon Valley of India.
By : HT Auto Desk
| Updated on: 28 Jul 2022, 15:44 PM 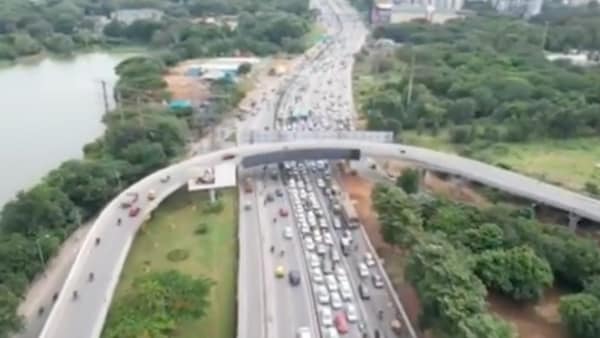 Bengaluru has become the first city in India to formally tie up with Google to improve traffic management system. The capital of Karnataka, which is also referred to as the Silicon Valley of India, is known for its traffic woes and narrow roads which often lead to traffic chaos. The Bengaluru Traffic Police will now use artificial intelligence from Google to address the problem. Pratap Reddy, Police Commissioner of Bengaluru, made the announcement through a social media post.

Admitting that managing traffic in Bengaluru is a ‘humongous task’, Reddy said, “We have recently started a pilot project with Google to optimise the traffic lights configuration. This has already reduced signal waiting time for commuters."

Bengakuru Traffic Police will use Google's AI to untangle the traffic mess often faced by commuters. This will help the city traffic police to track driving trends and come up with a revised plan for traffic management. Reddy said, “As per data provided by Google, on average, this has already reduced the 20 per cent of wait time for commuters on the road. Not just the time, this will also save fuel and avoid unnecessary traffic congestion in the city."

Commuters often use Google Maps for navigation purposes. The tie-up between the city traffic police and the tech giant will offer customised solutions as well. For instance, Bengaluru will be the first city where Google Maps will also feature speed limits when the app is used. "We also launched speed limits on Google maps and this will help us to deal with overspeeding vehicles in the city, digitally," said Reddy.

The top cop also said that Google will help optimise most of the traffic signals in the city. He said, “At least one crore vehicles in the city will see the impact soon. Google will also show us real-time live road closures across the city so that the commuters can keep informed about the disruption."

Earlier in June, Prime Minister Narendra Modi had given a 40-month deadline to the state government to find a solution to decongest the city.