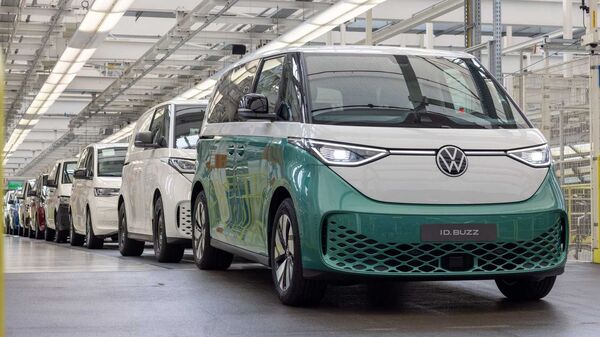 Volkswagen ID. Buzz will be manufactured in three different variants.

German auto giant Volkswagen has announced that it has started the series production of the ID. Buzz electric van, which brings back the iconic microbes in an all-new avatar and with an all-electric pooiwertran as well. Being developed under the Volkswagen Commercial Vehicles, the ID. Buzz is rolling off the assembly like in Hannover. The manufacturing facility has been revamped over the past two years for making it dedicated to the EV.

Volkswagen ID. Buzz will hit the showrooms sometime in late 2023, revealed the German auto major. Volkswagen has already revealed that the ID. Buzz electric van will be manufactured in three different variants. While there will be a variant meant for personal buyers, there will be cargo and transporter variants as well.

The automaker has revealed that it aims to build as many as 15,000 units of the ID. Buzz in 2022. The production volume is slated to increase to 130,000 units after the manufacturing speed reaches full speed.

The automaker claims that the US-spec Volkswagen ID. Buzz will be different compared to the European model. The US-spec variant will have a longer wheelbase and there will be three rows of seats. Inside the cabin, the ID. Buzz is claimed to come focusing on a high level of comfort.

Speaking about the powertrain, Volkswagen is currently producing only a rear-wheel-drive model with a single electric motor. The ID. Buzz will come with a more potent dual-motor electric powertrain combined with the AWD system. The EV is expected to generate around 300 hp of power, similar to what the ID.4 GTX and ID.5 GTX churn out.